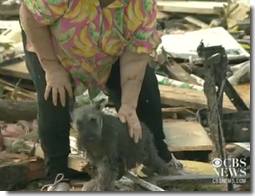 The scenes of apocalyptic devastation after yesterday’s tornado outbreak in Oklahoma are heartbreaking and horrifying. Yet, so many of the victims, when spoken to amid the torn up debris of everything they owned, are themselves being incredibly inspirational, using their voices to thank God for their survival instead of cursing the fate that put their houses in the path of the tornado.

And a video that is no doubt being circulated around the world right this minute is the one below, of one elderly lady in the ripped-up town of Moore who describes taking shelter in her safest room, the bathroom, with her dog on her lap. The tornado hit and everything was blown to pieces. Somehow she survived, though her dog disappeared and she assumes it—or its body—is under the rubble. She is speaking bravely and matter-of-factly—even wryly—about all of this on camera to a TV reporter when that reporter apparently sees something move, and says, “The dog!” (It seems way too pat, of-course, but if this elderly lady is an actor then I’m the president of the United States.)

As she pulls her dog from the debris and he manages to stand up on his four legs, she whispers, “Thank you, God.” Then she tells the reporter and the watching world, “Well, I thought God just answered one prayer, ‘Let me be OK,’ but he answered both of them …”