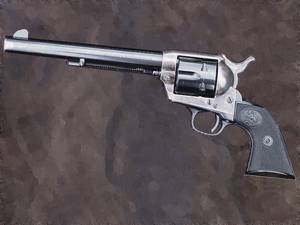 The state of Utah actually kicked things off a month ago, with a bill to designate the Browning M1911 semiautomatic pistol as that state’s official state gun. Utah would be the first state to have an official firearm. Now, there’s a proposal in neighboring Arizona to name the classic Colt single-action army revolver as the official gun of the Grand Canyon State (thanks to Mike for the tip). I must say that I do like the idea of going for an iconic firearm of the American West like that one.

The kill-joys are naturally complaining about the legislature spending time on such an issue, but State Senator Ron Gould, who sponsored the bill in Arizona, has responded: “We spent about 120 seconds of committee time on that bill. So it’s not like it takes an overwhelming amount of time. Generally, everybody asking why we are doing this takes longer than actually doing it.”

My own beloved New York City is sadly without an official firearm, although I have no doubt that — once he hears this exciting news from Arizona and Utah — Mayor Bloomberg will put the naming of one on his shortlist of priorities.

I would suggest considering either the sawed-off shotgun or the classic water-pistol painted black. Both are frequently utilized by Big Apple entrepreneurs, and I think that each in their own way would constitute a fitting symbol of the indomitable spirit of the true New Yorker.