George W. Bush declined President Barack Obama’s invitation to appear with him at Ground Zero in Manhattan tomorrow. Bill Clinton couldn’t make it either. It’s not entirely clear why they would have been invited, or what the current president is trying to do with the death of Osama Bin Laden.

President Obama appears to be overly eager to make of this moment something which it is not.

This is what happened, as far as we now know: U.S. Navy SEALs executed an astounding mission in attacking a compound deep inside Pakistan, near a military academy, and killing Osama Bin Laden, without a single American casualty. They should be extremely proud, and we can be proud of them. No one else should be proud of themselves. It has taken too long to find Bin Laden; that is a failure of U.S. intelligence, one of way too many. It took too long to authorize the mission to go in and get him; the suspect compound was discovered last August, according to reports. It is almost miraculous that Bin Laden was still there when President Obama finally authorized “kinetic” action.

It is understandable that the killing of Bin Laden provides an element of closure for those who lost loved ones on September 11th. That said, ten years later, only those among the rest of us who are willfully blind could possibly think that this is a moment of grand closure. 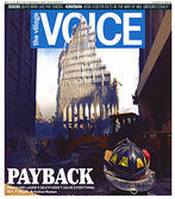 The cover of New York City’s Village Voice today features a picture of the destroyed Twin Towers and the single word PAYBACK.

How can this be put most straightforwardly? The killing of one man cannot be “payback” (if that’s even what you think was required here) for the murder of three thousand people on September 11th, 2001. The appropriate response to that act of war is the defeat of the entire movement which brought it to fruition, and which is still out there, and arguably more determined than ever, what with the tempting possibility of gaining sway in an array of Middle Eastern countries which are currently in chaos. That is jihadism, or Islamic fascism, or whatever other moniker you wish to put on the same phenomenon (so long as it is not white-washed with something that leaves radical Islam out of it). While the elimination of Osama Bin Laden shortly after the 9/11 attacks could have been a substantial blow to the morale of that movement, his killing in 2011 — after a decade spent in hiding — is unfortunately of little relevance. It is nice to know that he’ll no longer be issuing propagandizing statements (which were very rare anyway) but that’s about it. To the doubtful extent that he exercised any central guidance over al-Qaeda anymore, his absence will only make that movement more likely to lash out more impulsively.

All this raises the question of what exactly President Obama is trying to achieve by stretching out this moment into a grand event. He should know better than anyone the relative insignificance of the killing of this one man in May of 2011, versus the struggle that has been going on for ten years and will continue to go on for many years to come. Instead of trying to inflate this recent event with an importance which it does not warrant, the influence of his office would be better spent endeavoring to ensure that the American public as a whole retains the proper perspective for the future. That, of-course, would demand a certain amount of integrity.

On a tangential subject, the growing hoopla about whether Bin Laden was killed illegitimately — being as he was reportedly without a weapon on his person at the time — is a kind of payback for an administration led and populated by those who persistently accused the Bush administration of disregarding “international law” (as if there really is such a ridiculous thing). Put aside the legalisms, or let the Obama administration dance around them if they wish. The bottom line for the Navy SEALs actually executing the mission is that they were facing a terrorist who had to be presumed to be incredibly dangerous. They were justified in taking him out if they had any suspicion that he was doing anything less than utterly surrendering. He forfeited all right to any other consideration a long, long time ago.