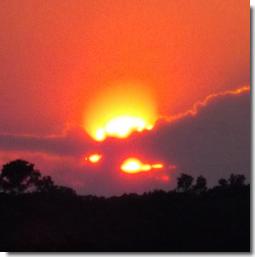 Once again, scientists have directed their telescopes and most advanced instruments upward, have spent long months studying the data and spending their grant money, and emerged to deliver their important conclusion: The sky is blue.

The story this time is in the UK’s Daily Mail: “Natural wonders increase our tendency to believe in God and the supernatural.” Doctor Piercarlo Valdesolo of Claremont McKenna College and Jesse Graham of the University of Southern California announced their findings based on studying the reactions of human subjects to awe-inspiring natural sights, and have concluded that such sights increase the tendency of people to believe in God or the supernatural. Amazing.

A more profound reflection on what this is all about, one which (as far as I know) did not necessitate making people watch videos of the Grand Canyon and answer questionnaires, is from Abraham Joshua Heschel’s wonderful book, Man Is Not Alone.

There are three aspects of nature which command man’s attention: power, loveliness, grandeur. Power he exploits, loveliness he enjoys, grandeur fills him with awe. We take it for granted that man’s mind should be sensitive to nature’s loveliness. We take it equally for granted that a person who is not affected by the vision of earth and sky, who has no eyes to see the grandeur of nature and to sense the sublime, however vaguely, is not human.

But why? What does it do for us? The awareness of grandeur does not serve any social or biological purpose; man is very rarely able to portray his appreciation of the sublime to others or add it to his scientific knowledge. Nor is its perception pleasing to the senses or gratifying to our vanity. Why, then, expose ourselves to the disquieting provocation of something that defies our drive to know, to something which may even fill us with fright, melancholy or resignation? Still we insist that it is unworthy of man not to take notice of the sublime.

Perhaps more significant than the fact of our awareness of the cosmic is our consciousness of having to be aware of it, as if there was an imperative, a compulsion to pay attention to that which lies beyond our grasp.

So, Heschel, in a few paragraphs written in 1951, not only comprehends already (and with far greater insight) what the scientists are busily issuing research on, but gets to the even bigger question: What does it mean that we even care to consider such things?

The scientists are moving on, however, and are now testing “whether adopting submissive body postures, which make us feel less powerful, might dispose us to experiences of awe.” Dr Valdesolo thinks this may explain religious practices such as kneeling and bowing. Get where this is going? In a kind of chicken and egg analysis, the scientist is suggesting that maybe it’s all the kneeling that people do in places of worship that causes them to feel awe and be religious.

So, the first man who knelt did it not because he felt awe, but because he wanted to feel awe? And then of-course he proceeded to make rules about kneeling for other people, and created this whole blight on the world known as religious belief. Ah, so to fix it we just have to stop people from kneeling!

It’s just amazing how utterly bereft of commonsense this kind of research into human behavior and motivations can be.

This writer can perhaps save the good doctor some time and money by assuring him that all the kneeling I was compelled to do in regular church attendance as a child and especially as an adolescent did nothing to inspire awe in me at all. It only increased the misery I generally felt at having to endure what I perceived as empty, hypocritical and dull religious observances. I likely have never felt farther away from God than then. And there is no doubt that similar feelings enveloped many of my peers, and for that matter you can find people in places of worship all over the world right now who kneel and bow because it is what they feel they must do, when their only concern is when the service is going to end.

No, I believe that kneeling in the absence of faith and awe does not somehow produce awe through some physical or chemical process, but instead only grows resentment. Personally, I’m just grateful to have lived long enough to be able to kneel because I now know it is the only thing to do when faced with the mercy and love and greatness of God.

Now … can I have some of that grant money?