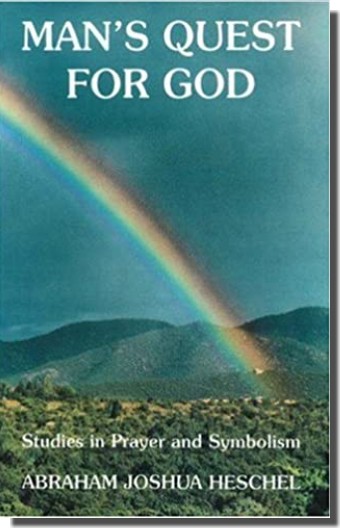 Yours truly spent some years without any easily definable or shall-we-say-biblical beliefs, but never shook off a belief in a God at the bottom of it all, and there’s no question that a love of music was the major reason for that. And it was purely popular music which I listened to during those years, and indeed that remains the form of music I’m happy to listen to most, hour for hour (albeit that some of it stretches the definition of “popular”). Being able to detect some shred of the transcendent in a song and performance which brought tears to my eyes for reasons that were ultimately inexpressible kept me in mind of the fact that there was, after all, a transcendence out there. Many are happy enough to concede the reality of an impersonal transcendence, but to me at least it’s always felt very personal in those moments, shot through with mercy and with hope.

Music can be composed specifically for the praise and worship of God—which is I think the kind of music Heschel has in mind in the above passage—but I happen to believe it’s true that music which is purely “secular” in original aim is also capable of hitting those heights and becoming in a fleeting moment a kind of prayer.

Enough half-baked philosophy from me. Considering a musical reference with which to punctuate this post, there is naturally no shortage of profound prayerful music, depending on one’s taste. However, I’ve been on a big Welsh kick lately, and so that will be my guide. Indeed, although my background is Irish (American), there have always been rumors in the family that there might be Welsh origins, due to the strange and very un-Gaelic spelling of the paternal surname. I’ve always dismissed this kind of stuff, having greater faith in typos than in anything else. Recently, though, I’ve decided to wholeheartedly embrace the theory, and I am determined to become the Welshman I always truly was.

Someone who never had to work at it was the great Harry Secombe, comic genius with the Goons, and in another incarnation a tremendous tenor who delivered especially-inspiring renditions of many great old hymns, becoming a staple on British television doing just that kind of thing.

You cannot get better than “Amazing Grace,” itself an intensely personal song with a remarkable and moving history. But watch out; if you should listen to Harry Secombe sing this without properly bracing yourself, it might just blow your cranium clean off. (In a good way, mind you.)

(The slideshow on the above-embedded YouTube clip is related to the man who wrote the lyric, John Newton.)