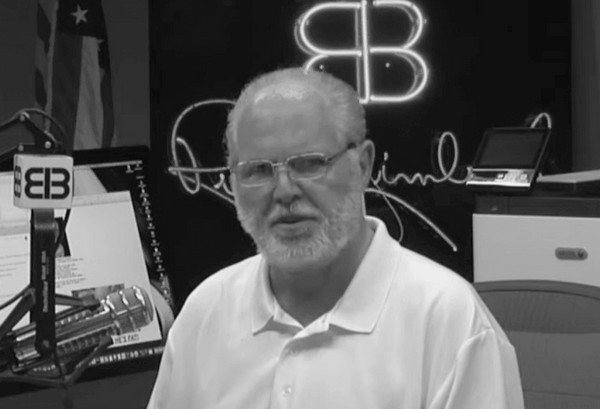 Maybe the world’s always been divided between those who’ve actually listened to Rush Limbaugh on the radio and those who never have. Today, however — the day of his death — this feels dramatically true.

Rush was a phenomenon on multiple levels. With all that’s being said about him today, it would be redundant of someone like me to go on about how much he transformed the American radio industry and influenced the political landscape. However, you could never appreciate what Rush did or how he did it without having listened to his show. It was his ability to be there for three hours a day, five days a week, and to be engaging, entertaining, provocative and human: this is what made him without peer. If one was getting one’s view of Rush from what the big media outlets said about him — generally only in moments of controversy and/or ginned-up outrage — then one would merely know a caricature. What made Rush tick with his audience was not the single soundbite, but the whole of what he did, even the rare uneven moments. Listening to just one show was always a journey of sorts — let alone the decades of indefatigable work.

As much as he was a giant, proven by all the achievements and numbers, I wonder how people in the future who never listened to him in full roaring topical context will possibly be able to understand what he was all about and how important he really was. Perhaps this is similar to how no one really knows anything about Will Rogers today, except that he was huge in his time. Yet, even if so, that’s OK: Rush’s thirty-plus years of ruling the moment from behind that golden EIB microphone will stand in the ether of time and resonate forever. There’s just no taking it back.

He’ll be missed not only by those who loved him and what he did, but also by those who hated him, even if they don’t realize they’ll miss him yet (and even if they never consciously realize it). If he did anything at all, he made those who felt scorned and ignored by the east coast/left coast media elite feel that they had a voice in their corner, and it was a big, cheerful voice, a reason not to despair in depressing times. Despair is dangerous. After the last 12 months of general horror and chaos in much of America, this writer can’t escape the nagging but unwelcome perception that Rush’s death and disappearance from the radio constitutes one more brick taken away from what remained of coherence in America’s body politic, after so much else has already fallen apart.

In a time of waiting for the next shoe to drop, a very big one just did.

I remember well when I first listened to Rush. Maybe all of us Rush-listeners do. It was about 25 years ago, when I was working an office job in New York City — a mind-numbingly boring niche in publishing — and one of my co-workers would have his headphones on through a large part of the day, and was frequently laughing to himself, albeit vainly trying to suppress his giggles. (In other moments, he seemed pretty normal.) One day he made reference to who he was listening on the radio: Rush Limbaugh. He emphasized that he didn’t agree with his politics — and I believe he meant it — but said that he just found him funny. Having no concept myself about Rush Limbaugh other than the media caricature already referenced — ideas like “blowhard,” “hate radio,” everyone knows the rest — one day I decided I might as well get a laugh if one happened to be available, and I fired up my Sony Walkman AM/FM cassette player and stuck the headphones on. American talk radio was a world unknown to me (one factor at least being my growing up in Ireland). Politically speaking, I was out of my youthful socialistic fantasies but not particularly committed to any other ideology. Rush was in a way a perfect voice to clarify the thoughts then floating around in my cranium about political correctness, which I’d flirted with as a young skull full of mush but had come to loath. Rush made me laugh about it.

It was the Clinton years, his second term, and El Rushbo was firing on all cylinders. There was zero real fear of what Bubba might do to the nation, at least as I recall; it was instead all powered by laughter at the looney things the left was trying to do, undergirded by a certainty that it would backfire and fail. Halfway between agreeing and disagreeing with Rush’s stance on various issues (idiot that I was), I couldn’t help but be carried along by his good humor and humanity about it all. Paul Shanklin’s musical parodies were delightfully outrageous and in the same spirit.

Having discovered AM talk radio via Rush, I naturally thought that there must be so much more great stuff out there. However, keeping the radio on didn’t take me to similar places. It turns out that it’s kind of hard to talk for three hours on topical issues and keep it fresh and entertaining. Other hosts veered into repetition and excessive reliance on callers and other gimmicks, and too often fell into being shrill and monotonously negative. Of-course there are — now as then — ones who are better and ones who are worse. But — now just like then — there are none with the perfect touch that Rush was able to deploy, that deft way with the microphone that simply recreated radio and gave an unexpected gift to America. It can only be something he was born with. Exactly like he said to his dying day, “Talent on loan from God.”

God has called back that loan. His timing is His business. He always has a plan.

Times changed for yours truly, and I couldn’t always listen to Rush at length in recent years, but he was always there, like a good friend, someone who’s point of view mattered, and with whom I could check in and share a laugh. Millions of us have lost that very good friend, and I think we all wish him Godspeed on his next adventure.

As much as Rush was so funny about so many things, he was serious about some. You could tell these things if you listened to him. He was serious about his love for America and the ideas of its founding. And he was serious about his joy on hearing about people who bypassed the weaponized misery of the American left — sometimes thanks to time spent listening to his show — and who took their fate into their own hands and embraced optimism, by starting their own business, or just by shaking off the shackles of victim-think, and learning to love freedom.

There’s much else that could be said about Rush, and much else being said. The hate-filled things that are being widely propagated only highlight the mindset of those who are unwilling to tolerate honest discussion. They are the ones saying “Shut up!” all the time: a command increasingly being enforced these days by Big Tech and other sanctimonious authorities, some of them armed. Rush was the one they never succeeded in shutting up, despite extraordinary efforts to do so. We shall all see what happens next. And we are all going to miss El Rushbo.

Loading Comments...
We use cookies to ensure that we give you the best experience on our website. If you continue to use this site we will assume that you are happy with it.OkPrivacy policy