Below, a photo of our little mutt, Billie, posing cooperatively and carefully amidst some very breakable Christmas ornaments (recycled from a previous Christmas photo session, in case anyone remembers). 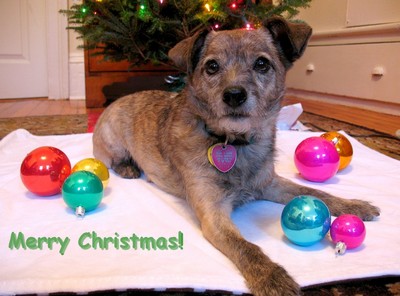 There were reports in the media earlier this year regarding a new book from Pope Benedict, the current commander-in-chief at the Vatican, titled “Jesus of Nazareth: The Infancy Narratives.

” It was said that he had debunked some traditional notions regarding Christmas. One of those had to do with the specific year in which Jesus was born, to the effect that it was likely not in the year 1 AD, but rather in the year 5 or 6 BC. This fact is really nothing new (although it must have caused no end of confusion for calendar-makers back then: “Well, is he here yet or isn’t he here yet? We can’t cancel another print run!”)

The other reported-debunking was more controversial, however. It was widely broadcast just as in the following story:

In the new piece [Pope Benedict] explains that contrary to popular belief, and contrary to what millions across the globe are doing by decorating their nativity scenes with popular animals, Jesus’ birth was not surrounded by oxen, horses, sheep and other such animals.

Pope Benedict has written in the third and final volume of his biographical piece on Jesus, “There is no mention of animals in the Gospels.”

I was all set to debunk the pope’s own debunking in this space (because as reported it sounds pretty darned inane), but something told me to double-check on the text that actually appears in Benedict’s book. Lo and behold, I didn’t find it to be precisely as reported. In the section of the book where he is writing on that passage of the Gospel of Luke which references Jesus being born in a manger, what I found instead was a series of very thoughtful reflections on the meaning of that context for Jesus’ birth, including on the presumed presence of animals. Some of it, from page 69 of the book, is below:

The manger, as we have seen, indicates animals, who come to it for their food. In the Gospel there is no reference to animals at this point. But prayerful reflection, reading Old and New Testaments in the light of one another, filled this lacuna at a very early stage by pointing to Is 1:3: “The ox knows its owner, and the ass its master’s crib; but Israel does not know, my people does not understand.”

Peter Stuhlmacher points out that the Greek version of Hab 3:2 may well have contributed here: “In the midst of two living creatures you will be recognized … when the time has come, you will appear” (cf. Die Geburt des Immanuel, p. 52). The two living creatures would appear to refer to the two cherubs on the mercy-seat of the Ark of the Covenant (cf. Ex 25:18-20), who both reveal and conceal the mysterious presence of God. So the manger has in some sense become the Ark of the Covenant, in which God is mysteriously hidden among men, and before which the time has come for “ox and ass”—humanity made up of Jews and Gentiles—to acknowledge God.

Through this remarkable combination of Is 1:3, Hab 3:2, Ex 25:18-20 and the manger, the two animals now appear as an image of a hitherto blind humanity which now, before the child, before God’s humble self-manifestation in the stable, has learned to recognize him, and in the lowliness of his birth receives the revelation that now teaches all people to see. Christian iconography adopted this motif at an early stage. No representation of the crib is complete without the ox and the ass.

So, the way this passage has been represented in all of those news articles turns out to be almost precisely the opposite of its actual import. File it under “You can’t believe what you read in the papers, Volume MMXCVIII.” When the former Cardinal Ratzinger wrote, “In the Gospel there is no reference to animals at this point. But …” he was not denying that it is nevertheless reasonable to infer that animals were nearby; to the contrary, he was ultimately expressing glad agreement with such an inference. And he then obviously goes on to lift up some scriptural resonances he finds interesting. Naturally, if there was a manger (which is a feeding trough for farm animals) it is quite logical to presume that actual animals were not that far away. The fact that the Gospels don’t specifically mention them should in no way be considered a denial of their presence.

Not even being Roman Catholic in belief or practice, I am no die-hard defender of the pope, but it is absurd as well as dumb to take this passage of Benedict’s book, as the journalists did, and say that he was characterizing the presence of animals as myth. And think of it this way: If you’re the pope, and you publish a book, and you can’t get a fair shake from the press as to the straightforward meaning of its content, then what hope is there for any of the rest of us, should we come under the media’s glare?

Don’t believe what you read in the papers.

And in the end, when it comes to Jesus and the animals, it is probably safest to trust Tennessee Ernie Ford, and his rendition of the beautiful old song (it dates all the way back to the 12th century) known as “The Friendly Beasts.”