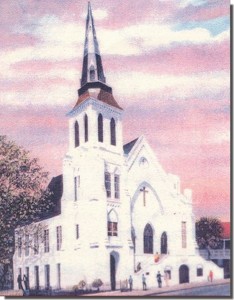 It’s happened again—it happens every time, and there is no simple obvious solution that would prevent it from happening in the future, but it still needs to be said that the very worst thing that can be done in the aftermath of an act of horrific nihilistic violence such as occurred in Charleston, South Carolina a few days ago is to publish and propagate the “manifesto” of the perpetrator. This individual, a few moments before murdering these innocent people, had nothing but his own demented ramblings and photos of himself in his bedroom playing with a gun. By committing the mass murder, he has elevated this garbage in which he wallowed to the level of international news, for millions to peruse. How many similar sick souls are out there who are now encouraged all the more to take the same steps? We all should dread to think.

Dylann Storm Roof was apparently blighted from the beginning by parents who thought nothing of giving him a name made for mockery. But people have survived worse. He may well have suffered much worse, and that would be a shame, and it’s a shame that the intervention of kind and thoughtful people didn’t at some point alter the trajectory of his life. It may be that he murdered the kindest people he had ever met, at that Bible study in that church on June 17th, 2015. Yet the names that should be remembered are those of his victims:

These are people who did not reduce their lives to some easily propagated and dumb manifesto. They will no doubt be remembered by those who knew them and loved them for all the good that they accomplished each day in a world that can sometimes seem to just throw up obstacles to good, but where decent people still get up every morning and do their very best.

It is a devastating testament to the character of these martyrs—which they surely are—that a number of family and friends stood up at the arraignment of the alleged perpetrator and offered him forgiveness. What special thing do they possess to give them the strength to do this?

I cannot imagine giving forgiveness to the unrepentant killer of someone I love. I only hope, like anyone else would, that I never have to face that situation.

An act of such violent nihilism inevitably makes people take stock of where they stand on the most fundamental of levels. What does meaninglessness mean?

For myself I sometimes nurture a theory that there is no such thing as an atheist. Of course there are those who attest with all sincerity to believing in no God, yet everyone who functions believes in something that goes beyond what he or she can see. It might be mere rationality, or science, or nature, or music, or art, or love itself, but there is something beyond the tip of our noses that keeps us moving forward instead of aiming for the ground. A believer in the biblical God might argue that all of these are either an element of God’s creation or an emanation of God Himself — but maybe I’ll leave that for a much longer self-indulgent thesis on the subject.

So if everyone believes in some facet of God, why are there any problems? The problem in the context of this latest atrocity and similar ones is this: Some few souls at the extreme of human existence come to the conclusion that whoever and whatever God may be, they hate Him. They decide to deny all and to reject all. To do that demands doing something so horrible that no meaning can be found in it.

No one who hates people for being of another race can love God, since God must naturally be presumed to have created all races. An act of mass murder like the one that just occurred in Charleston, South Carolina is an act of hatred and rejection of God Himself, an “FU” to God.

The forgiveness that the bereaved loved ones extended to the killer might well be rated as the ultimate disproving of that philosophy. What is real about his hatred, after all? What can be more real in this world than the love of those who have had so much taken from them and yet can still stand up and forgive? That’s a reality that defies and transcends other more mundane realities, and one that the bullets of a killer can despise but cannot ever defeat.

And one that offers to everyone else a reason to carry on.