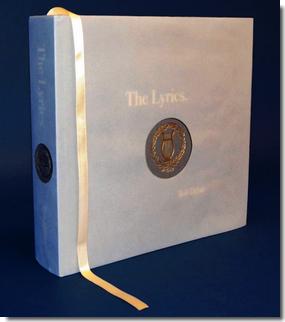 On October 28th, Simon and Schuster will be publishing The Lyrics: Since 1962 by Bob Dylan, edited and with an introduction by noted literary scholar and critic Christopher Ricks, and co-edited by Lisa and Julie Nemrow. It is to be rather different from previous “Lyrics” collections. As the New York Times reports, it will compile not only previously published official lyrics, but also the lyrics as sung on any officially-released recording (and there are a quite a few of them when you think about it) and will also feature alternative lyrics that have never been publicly released. In this way, it promises to be a real and quite large window into Dylan’s creative process.

The layout is also rather different to previous collections of lyrics. As reported:

The way the songs are laid out is meant “to help the eye see what the ear hears,” Mr. Ricks said. “If you print the songs flush left,” he added, “it doesn’t represent, visually, the audible experience.” So refrains, choruses and bridges are indented. And where Mr. Dylan intended a line, however long, to be unbroken, it sprawls across the 13-inch-wide page.

It’s a big book, then. Indeed, the talk is that it consists of about 1000 of those 13-inch-wide pages and that it weighs in at about 13 and a half pounds. It is reportedly the biggest (and most expensive) book Simon and Schuster has ever published.

When I saw this I was immediately reminded of the line from “Tombstone Blues” about “twenty pounds of headlines /
Stapled to his chest.” But these lines will instead be binded in hardcover, and will include album art and a lot of annotation.

In the world and industry of Bob Dylan, which is always full of events, I think this probably counts as a real one. Christopher Ricks needs no introduction to Dylan aficionados; he’s been out there for a very long time talking about Dylan’s talent with words, and his 2004 book Dylan’s Visions of Sin is a work of profound appreciation which added to the degree that yours truly and doubtless countless others appreciate Dylan’s work. (And despite the mini-industry in Bob Dylan-related books, it’s my belief that that achievement remains pretty rare.) I also know a little of co-editors Julie and Lisa Nemrow—enough at any rate to know that they are a talented and dedicated pair. So this all is reason to very gladly anticipate the new book.

Given its size, scope, weight and price tag ($200 list price, plus a very special hand-numbered signed-by-Bob limited edition for merely five grand) it won’t be for everybody’s bookshelf, but its existence alone will likely make it a pretty crucial and invaluable reference point for a long time to come, for anyone interested in the study and appreciation of the way Bob Dylan uses words in his songs.

Via Amazon: The Lyrics: Since 1962 by Bob Dylan