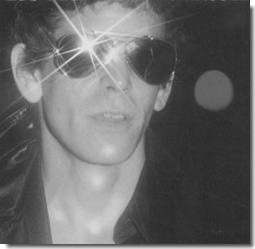 It was something of a shock seeing the announcement today of Lou Reed’s death. Although chronologically he was 71 years-old, and although it was known he’d been having health problems, Lou Reed seemed more ageless than most. It’s hard to recall when he might have been young. He was just … Lou Reed. Never overexposed, but popping up from the periphery with reassuring regularity.

Despite his orneriness and his sometimes arrogant persona, and despite his tendency (at least in my opinion) towards self-indulgence in his work, there was something very likeable about Lou. He didn’t just have a unique singing voice; he was a unique voice. Although his music was intensely simple, he was one of the few true stylists of the whole rock & roll circus of the last fifty years, a seminal influence to countless other performers and one who never lost his creative spark.

And his was a true New York voice, albeit one as dark as the shadow cast by a dumpster in an alley behind a strip-bar. When he released his album New York in 1989, the title itself had an air of redundancy: wasn’t all his stuff about New York? But that one had a special time-capsule-like quality, capturing the city at the very lip of the abyss.

There are plenty of great Lou Reed tracks that people will be listening to long after so many other records made contemporaneously will be gathering dust. For me I think maybe it is “Street Hassle” that most comprehensively captures the grim grandeur of Lou Reed at his best.

By the way, that’s really some bad shit
that you came to our place with
but you ought to be more careful around the little girls
It’s either the best or it’s the worst
and since I don’t have to choose
I guess I won’t and I know this ain’t no way to treat a guest
But why don’t you grab your old lady by the feet
and just lay her out in the darkest street
and by morning, she’s just another hit and run

Rest in some kind of peace, Lou.