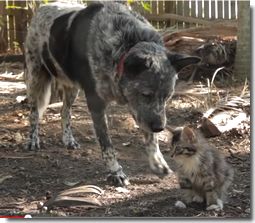 The second video, which has caught the eyes of over a million people, features an Australian Cattle Dog named Max, who has apparently befriended a kitten named Ralphee who suffers from a neurological disorder, causing her to move in an unpredictable and wobbly manner. This video clip one may watch without injury.

Those who are “animal lovers” might be inclined towards a simple interpretation: People are cruel, and animals are nice. Yet, this does not tell the whole story.

Undoubtedly, human beings are capable of warped and pointless kinds of cruelty which would not occur to any animal. The dishonesty inherent in coaxing a cat to come towards you when your plan is only to kick it into the air … this would be incomprehensible to an animal. I watch my own small terrier hunt squirrels and other rodents. She freezes so as to make them think she is not there, but she does not ever pretend to be their friend. She does not lie in such a shameless fashion to her intended prey.

Yet, nature is also cruel. The little kitten portrayed in the video linked above would not survive a day in the wild, jumping and jerking about in such an uncontrolled fashion. She would stand out as being weak and vulnerable, and some other predator would make quick work of her.

Max, the Australian Cattle Dog, could eat her up in one bite. In many cases, this is exactly what a dog would do. And no one would wonder about it. Instead, the kitten’s strange behavior and movements arouse both his curiousity and some deep protective instinct. He can see that she is incapable of protecting herself, and he seems to care where she goes and what happens to her. Of-course, but for the fact that both animals are tamed and tended by concerned human beings, the result could be very different.

Like the man from Brooklyn who kicks the cat in the first video, we are all capable of doing bad things for bad reasons. Yet humans are also capable of doing good things for inexplicable reasons: helping a neighbor, a friend, a stranger, when there is no logical reason for doing so.

The behavior of the dog in response to the disabled kitten does not prove that nature is always kind, no more than the footage of the man kicking the cat means that human beings are always cruel. Yet the dog’s concern for the kitten surely tells us one thing, at least: that there is a kindness embedded in God’s creation, even in the instincts of animals. This kindness comes out when it is enabled and encouraged. It is rightly a remarkable thing, and it is also no small thing with which to nurture our hope.