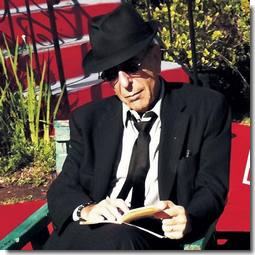 So, the other day I saw Leonard Cohen (who as previously mentioned has a new album out) being interviewed on a British television program and during it he was asked if he believed he was an optimistic person, and I thought his response to this question was quite penetrating and timely. He said (and good-naturedly, while wearing a slight smile):

Well, you know, I think those descriptions are kind of obsolete these days. Everybody’s kind of hanging on to their broken orange crate in the flood, and when you pass someone else and declare yourself an optimist or a pessimist, or pro-abortion or against abortion, or a conservative or a liberal, these descriptions are obsolete in the face of the catastrophe that everybody’s really dealing with.

At the present moment, I would daresay that those are words that would strike a definite chord with many of us. (By “us” I guess I’d be referring, in the broadest sense, to we who inhabit the most highly developed and consumerized societies of the world, and are presumed to be insulated from massive and generalized kinds of catastrophe.) I’d venture that many of us have a sense of impending disaster in this insecure age of Ebola and of ISIS and (I’d suggest) the impossible-to-grip transformations that the digital/internet age has wrought in our lives in such a short time. And that is not to even mention the many other manifestations of disorder and danger in the headlines.

However, the funny thing is that Leonard Cohen didn’t actually say these words in an interview just the other day. This particular interview did not take place while promoting his current new album, Popular Problems, but instead while he was on the road in 1993 with his then newly-released album titled The Future. Twenty-one years ago, that is. (He seemed kind of old and wise back then, but gosh, no one had any idea how much older he was going to get.) It was during a short but engaging chat with the estimable Jools Holland on the BBC (currently available via YouTube at this link).

I suppose, hearing this back then, one might have been inclined to think, “Well, that’s just Leonard being Leonard.” Talking about holding onto a crate during a flood, the catastrophe everybody’s dealing with … what the heck? What was so bad in 1993? It depends how you look at it, of-course. There are always catastrophes happening somewhere, there is always human suffering, and indeed everyone as an individual gets to deal with hell in one way or another during his or her life. Perhaps that’s the true poetic or prophetic way of looking at things, at any given time.

But being an ordinary inhabitant of the Western world in 1993, and looking at things in a broad geopolitical kind of sense, what was so bad? To the contrary, in many ways, things were amazingly good. The Iron Curtain had begun falling a few short years earlier, the Cold War was done (the West had won) and democracy and freedom were clearly values on the ascent. The United States had a young, handsome new president, and … well—economically, things were on the upswing, as they had been as part of a broader arc for some time: prosperity seemed generally unstoppable. Indeed, we were right at the cusp of the great technological/internet boom. Orange crates? Floods? Catastrophes? That Leonard Cohen guy was clearly smoking something of very dubious quality.

His fundamental sense of the state of things as reflected in that question with Jools was however certainly of a piece with his then relatively new song, “The Future,” and I think that song also happens to sound especially timely in the present moment. 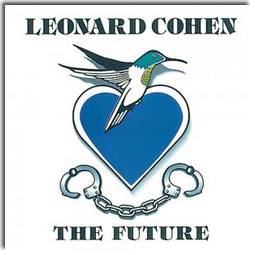 It’s a very blackly humorous song, even by Leonard’s standards. The lyric is built around a litany of things from the past that the singer is asking to have back; they are bad things, and some of them are things that were not exactly gone in the early 1990s, but the fear of which was at least on the wane. Why does the singer want to have all these nasty things back? Because, simply: “I’ve seen the future, brother / It is murder.”

It may be grim subject matter, but you can’t help notice that Cohen has fun with it, right down to the uptempo, sexy nature of the pop tune that carries the lyric. And if you are in a place where you can have a certain amount of fun with the deepest darkest doom, then that is a kind of liberation. It is better than being enslaved to fear of it.

What are some of the things the singer wants to have back?

He doesn’t sing those lines in quite the same way in his live performance on the still-sometimes-staid BBC (video at bottom).

But these are allowed:

The Berlin wall, Stalin, Hiroshima: we know a little bit of why those were bad, but St. Paul and Christ? There’s a joke here, I think, and a Jewish one at that. While Paul and Christ have good reputations with many, their arrival did portend some terrible history for Jews, and the singer in this very song brags: “I’m the little Jew who wrote the Bible,” so that it’s clear where he’s coming from.

What’s going to happen that is so much worse than all these previous horrors?

Things are going to slide, slide in all directions
Won’t be nothing you can measure anymore

Using the image of things sliding to evoke a series of cataclysms is nice not least because works so well in a pop song like this, suggesting a dance, even if a dance of doom. And the notion that what will happen will be beyond what we can measure is a wonderfully economical way of describing its height and breadth. After all, what do we do with misfortune in our modern, controlled and civilized world? We attach numbers to it. There are statistics for everything: car crashes, heart attacks, all the various kinds of cancer, influenza deaths in any given season, broken legs, carpal tunnel surgeries … but what’s coming, the singer tells us, is going to defeat all our capacities for measurement. Use your imagination.

Why is this going to happen?

What a great couplet; I think beyond analysis in its perfection. Yet, if it seemed to a poet/prophet back in the early 1990s that a blizzard of the world was going to overturn the order of the soul, how much further has the snow piled over the threshold now?

There’s even a hint at one point in the song of the yet-to-occur “communications revolution” or however you would want to describe the situation we find ourselves in today with ever pressing gadgetry, social media, and so on:

The final lines of the final verse, I think, put a most chilling cap on everything, in that what’s cited is not a product of the imagination at all, but too often the spirit of the culture in the present time (or maybe more like that hole in the culture previously cited):

Destroy another fetus now
We don’t like children anyhow
I’ve seen the future, baby: it is murder.

And the haunting refrain plays us to the end:

When they said repent
I wonder what they meant

Yet, all is not utterly dark. The song does have one line of relief, hiding within one verse, the same one where the singer takes credit for being that Jew who wrote the Bible. He goes on:

I’ve seen the nations rise and fall
I’ve heard their stories, heard them all
But love’s the only engine of survival

Love. All you need, after all, even here.

So at least there’s something worth holding onto when …

…the wheels of heaven stop
You feel the devil’s riding crop
Get ready for the future
It is murder.


Related articles across the web