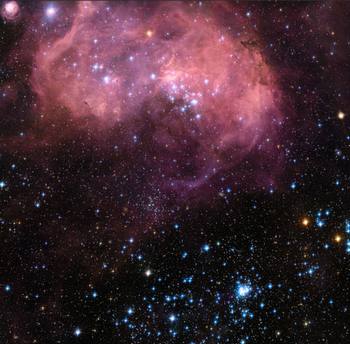 Pictured here is just another breathtaking image from the Hubble Space Telescope, recently released. It is of a region called N11 of the Large Magellanic Cloud. The sciences of physics and astronomy tell us that what we’re looking at is a nursery of stars. (More images and more details are at this link.) Gases are being compressed and compacted here and nuclear fusion is sparking and bringing forth bright new spheres of light and energy which will shine for billions of years, like our own Sun. What planets might they light, what frozen or perhaps boiling vistas on strange and beautiful worlds that human eyes will never see?

When I look at your heavens, the work of your fingers
the moon and stars, which you have set in place,
what is man that you are mindful of him,
and the son of man that you care for him?

When I was younger, there was a very difficult-to-resolve conflict here. I was fascinated by the awesomeness of the cosmos. (And yeah, that included the awesomeness of TV’s Carl Sagan, R.I.P.) Like so many others, then, now and ever, I would contemplate the deliriously unimaginable dimensions and numbers of the Universe — the stars, the galaxies, the presumed planets, the unthinkable energies and spaces — and marvel, and dream of flying through interstellar space in some sci-fi style ship observing and exploring it all. At the same time, with my Roman Catholic upbringing, I was taught of a God (not to mention the many saints, angels, etc.) who was dreadfully preoccupied with the most minor goings-on amongst our human species on this one planet Earth. It was out of proportion. It was in a real way ridiculous and incomprehensible.

This was a genuinely serious dilemma, which persisted well into adulthood, and I actually think it quite right that it should be a serious dilemma for any thinking person trying to comprehend the notion of faith in God. (Of-course, some thinking people even as children might receive more fitting guidance than I happened to encounter. I can’t say how I would have dealt with a different kind of religious education.) Why, if we believe ourselves to be so significant to this omnipotent God, would He have created this huge universe around us? We are not even specks in this cosmos; we are like tiny atoms within a single speck, if even that. We are, with all of our efforts, with all of our industry, with all of our constant yapping, with all of our architecture, with all of our paintings, with all of our poetry, with all of our angst and with all of our crimes, utterly and hopelessly negligible in the Universe which we laughably claim to occupy. Our disappearance would barely count as an event at all; it would be about as unimportant as the disappearance of a small, stray asteroid somewhere in the vastness of space (like the one that could have hit this planet at any moment in our history and ended our existence).

In the end, however, it wasn’t any single complex philosophical explanation that brought me around to a different way of weighing these things. There were, naturally, philosophical writings to read along the way, and all those moments and twists of fate that a believer can only finally put down to that thing we call the grace of God (which sounds like a cop-out and in a way is the ultimate and most welcome cop-out of all). But somewhere in there this particular schlub went from reflecting on the incongruity and absurdity of the human relationship to the greater cosmos to instead being able to marvel and weep at the poignancy of God’s relationship to us.

It’s one of the mysteries of the Bible, I guess, that one can read certain lines from it at a certain time and be unaffected, or merely bored, and then later read them with different eyes and be stopped in one’s tracks. All the worrying one can ever do over the supposed conflicts between science and faith was already dealt with so neatly and decisively by the psalmist in those lines already quoted from Psalm 8:

When I look at your heavens, the work of your fingers,
the moon and the stars, which you have set in place,
what is man that you are mindful of him,
and the son of man that you care for him?

What, indeed? Science daily tells us how ridiculous it is; it is that much more ridiculous than it was the day before. And it is the very ridiculousness of God’s mindfulness of us that, in the light of faith, becomes sublime.