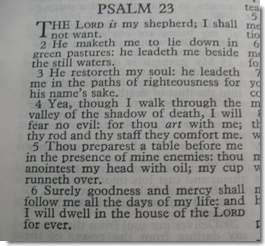 Today was what is known as “Good Shepherd Sunday” in many Christian churches, the appointed psalm being Psalm 23, and the gospel from John, chapter 10. And the second reading one may have heard, from Revelation, chapter 7, has this:

For the Lamb in the midst of the throne will be their shepherd, and he will guide them to springs of living water; and God will wipe away every tear from their eyes.

It’s natural to focus on the promise of every tear being wiped away, which is that which we all long for, but the image of the Lamb being the shepherd is such a beautiful and mysterious and imponderable thing, and all the more worth pondering for that.

And in quite a few churches today a hymn known as “The King of Love My Shepherd Is” was likely sung. The words, heavily inspired by the Twenty-Third Psalm, were written by Henry Williams Baker in the latter half of the 19th century. It is in fact reported that his dying words were those of the third verse of that hymn:

Perverse and foolish oft I strayed,
But yet in love He sought me,
And on His shoulder gently laid,
And home, rejoicing, brought me.

The tune most often put to the lyric is an ancient Irish one known as “St. Columba.”

And so here it is, via YouTube below, being sung in a church in Ireland, namely St. Killian’s in the town of Carnlough, County Antrim.

And here by the Cardiff Festival Choir & Owain Arwel Hughes.

In death’s dark vale I fear no ill
With Thee, dear Lord, beside me;
Thy rod and staff my comfort still,
Thy cross before to guide me.