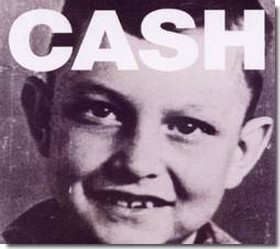 It’s said to be the final song that Johnny Cash composed, titled “I Corinthians 15:55,” and the refrain goes like this:

Oh death, where is thy sting?

Oh grave, where is thy victory?

Oh life, you are a shining path

And hope springs eternal just over the rise

When I see my Redeemer beckoning me

The first two lines are the ones cited in the title, from St. Paul, but Paul in his turn was quoting Hosea 13:14 in that particular passage. As goes Scripture, so goes country music: The great lines are reused forever. Cash would have known well that he was invoking both the Old and New Testaments there, and the resonance of a promise that doesn’t fade.

This song is the fourth track and the heart of the new, posthumously-released Johnny Cash album, American VI: Ain’t No Grave

. (It is the sixth in Cash’s “American Recordings” series, produced by Rick Rubin, the first of which was released in 1994.) By itself, “I Corinthians 15:55” must make most listeners grateful for the existence of the album. With months left to live, and in the shadow of the death of his wife June, this sweetly melodic composition, played like a chamber-piece from the hills, is simultaneously his faithful testament and urgent prayer, and so asserts a spirit that was never very far from his work during his half-a-century in show business.

Show business? It was that. We may forget, because of his tremendous presence, both on stage and in the arena of memory, that he was a man practicing a profession. If anyone ever seemed like the proverbial force of nature, it was Johnny Cash. Yet, his thunderous sound with voice and guitar, his imposing manner and profile, and all the elements of what you could fairly call his shtick were in the end tools  to a purpose beyond the mere acquisition of attention. While lesser-performers employ their shtick only to that end, Cash directed his gifts towards expressing the sentiments of the song which he was singing at any given time. Whether performing a classic of his own like “I Walk The Line” or “I Still Miss Someone,” or a gospel number like “Were You There When They Crucified My Lord?”, Johnny would put it across with a clarity and an honesty that left a listener with no room for doubt. Cash’s delivery was always unmistakable, but the song, in his hands, was also unmissable.

This series of Rick Rubin-produced albums has been questioned by some (notably Ben Greenman in the New Yorker) for pushing a less-fully-dimensioned picture of Johnny Cash than the one we had before. Too much of the somber, perhaps, and not enough of the driving positive spirit and even corny humor of Cash in other decades. I find myself agreeing with that, although I also find it hard not to like Cash in almost any incarnation. Another concern is the uncomfortable sense, sometimes, of crossing a boundary into voyeurism or exploitation; Johnny Cash is dying, singing his last, with audible cracks in that great clarity of the past, and here we are watching and listening, over and over again. Yet, there can be no doubt that Cash knew what he was doing, and who would fault him for choosing to go out singing? Jimmie Rodgers and Hank Williams died young and we can only speculate at what music they may have made in old age. Cash, not quite the originator that those two were but a true original nonetheless, stuck around to deliver a lengthy valedictory; should we be ungrateful because not every line has been perfect? Johnny’s taste was never quite immaculate, but his missteps were always forgivable. In a career as long as his was, I think that the cream will ultimately rise to the top. These “American Recordings” loom extra large right now in the popular perception because they form the most recent chapter, but posterity will always need to reckon with the Johnny Cash of the 1950s and ’60s to understand who he was and why his music mattered at all.

While, as said, “I Corinthians 15:55” makes this album worthwhile by itself, there are also tracks which I believe are destined to be forgotten, and with justification. “Redemption Day” (by Sheryl Crow) is just a flat song, not up the company it’s keeping here. “Cool Water” (by Bob Nolan) as a tune is the very opposite of flat, but — sorry, Johnny! — why even go where Marty Robbins has already declaimed so definitively? “Last Night I Had The Strangest Dream” is the well-known song by Ed McCurdy about the signing of a paper “to put an end to war.” In sentiment it reminds me of the bumper-sticker message that says something like, “It will be a great day when our schools get all the money they need and the air force has to hold a bake sale to buy a bomber,” and is about as profound. Yet, here I have to admit that Cash compensates for the weakness of the material somewhat with the authority of his performance. There is at least a knowledge present in his singing of the song which the tune does not convey in the hands of others, but this listener would still be happier without the track.

Two good songs that gain poignancy in Cash’s renditions are “For the Good Times” (the country standard by Kris Kristofferson) and “Aloha Oe,” the sweet Hawaiian goodbye from Queen Lili’uokalani, which could have served well as a more whimsical title track. There is no questioning, however, the aptness of the traditional song “Ain’t No Grave” in that role. The performance both inspires and chills, with the percussion somewhat evocative of a coffin being repeatedly dropped. His voice, although ragged, is unquestionable. Johnny Cash has always had a special way of singing a gospel song.

Oddly enough, I only recently saw a 1972 film that Johnny and June made called The Gospel Road, a story of Jesus Christ utilizing both music and actors. To my chagrin, I found it almost unwatchable; to me (even as a believer) it was excessively didactic and awkward. No such weaknesses accompany the way Cash puts over a song of faith, however, whether “Ain’t No Grave” here or his rollicking version of “The Old Account” from back in 1959. His sound has always been that of a man aching for his Redeemer, desperately in need of that redemption, and at the same time filled with joy at the softest touch from above, already received.

And there surely ain’t no grave gonna hold his body down.

(Note: An adaptation of this review also appeared on the First Things website.)