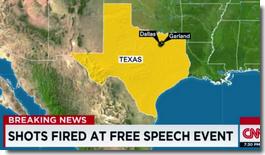 We might have woken up to news of dozens of people shot to death at a cartoon exhibition in Texas, with scenes of corpses and pools of blood, and triumphant announcements from jihadists declaring that the “honor of the prophet” had been avenged, in a repeat of events that occurred on January 7th, 2015 in Paris, France. Instead, thanks to the good shooting skills of some members of the Garland, Texas police department*, two would-be enforcers of the rules of Islamic sharia are dead, having only managed themselves to wound a security guard before they and their AK-47s fell to the ground. And may that security guard have a speedy and complete recovery. 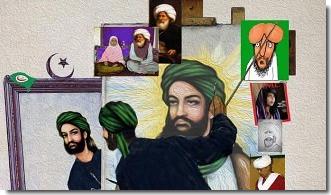 Had it gone the other way, would we be seeing a flood of Twitter hashtags like #JeSuisPamela? I wonder. Pamela Geller doesn’t have any great cachet of hipness on the left or the right. She’s not French. She’s a brash New Yorker who is dedicated with a burning passion to opposing violent jihad and the spread of the ideologies that give rise to it, but she lacks much in the way of an internal governor to keep her from, among other things, latching on to loony theories—sometimes on subjects extraneous to jihad—and I think has thus alienated many who might otherwise be good allies.

But freedom of speech must be non-negotiable in the United States. And this means in particular the right to criticize or mock a philosophy one opposes, and it means in particular the freedom of those with whom you disagree to nevertheless state their opinions, whether via the written word, verbally, in music, in movies or in the form of cartoons. They may be argued with, they may be mocked in their own turn, or merely ignored, but they cannot be shot to death for the expression of their opinion. And fear of those who would shoot to death or behead those with whom they disagree cannot be allowed to proscribe freedom of speech in America. Not in the name of anybody’s definition of blasphemy.

Say what you like about Pamela Geller, but she has knowingly made herself the biggest target in the United States of an ever-growing movement that is daily massacring people across the globe, from Nigeria to Iraq to Syria to Afghanistan to China to Paris, and yesterday they came for her and her compatriots at an event hall in Garland. She has guts. She may be the biggest target right now, but this is a movement that by its own account will not be satisfied until it forces everyone to submit.

And if these two jihadists had not had this cartoon exhibition to attack, let no one be foolish enough to think they would have lived a quiet life and made their contribution to freedom and prosperity. They would instead have simply focused on a different target.

Thank goodness on this occasion they met a well-prepared reception.

*Addendum: It’s now being reported that one officer, armed with a pistol, successfully took down both attackers, who were armed with assault rifles and wearing body armor.