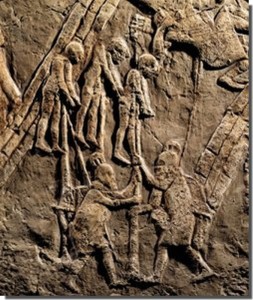 Today while re-reading Abraham Joshua Heschel’s great work The Prophets, I came across this passage which put me in a “nothing-ever-changes” frame of mind:

Assyria has often been called the most ruthless nation of antiquity. For ages she plundered all peoples within her reach, like a lion which “filled his caves with prey and his dens with torn flesh” (Nah. 2:12 [H. 2:13]). Her warfare abounded in atrocities; cutting off the heads of conquered peoples was a common procedure. The kings of Assyria boasted of towns destroyed, dismantled or burned, leveled as if by a hurricane or reduced to a heap of rubble. The victors took away everything they could carry. Upon capturing a city …

And here Heschel quotes from a book of history

… the king’s throne would be set up before the gates of the city and the prisoners would be paraded before him, led by the monarch of the captured town, who would undergo the most agonizing torture, such as having his eyes put out or confinement in a cage […] Sargon had the defeated king of Damascus burned alive before his eyes. The wives and daughters … were destined for the Assyrian harems and those who were not of noble blood were condemned to slavery. Meanwhile the soldiery had been massacring the population, and brought the heads of their victims into the king’s presence, where they were counted up by the scribes.

(And there’s more on the famous neighborliness of the ancient Assyrians at this link.)

A few decades later, after the downfall of Assyria, it was Babylonia whose might and splendor held many nations in her spell. A state of intoxication, a voluntary madness, overcame the world, eager to join and to aid the destroyer, accessories to aggression.

As someone once said, there’s nothing new under the sun. We think we’ve gotten far beyond the point where cutting off someone’s head and waving it around is an effective way to win friends and influence people, and yet here we are well into the 21st century, and it’s an approach that is earning dividends and disciples in the age of Twitter and Instagram.

Well, at least, in this ever-changing world, there are some things we can still rely upon.