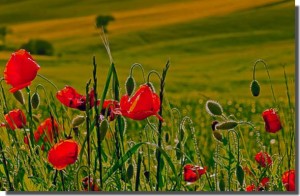 In Flanders fields the poppies blow
Between the crosses, row on row,
That mark our place; and in the sky
The larks, still bravely singing, fly
Scarce heard amid the guns below.

We are the Dead. Short days ago
We lived, felt dawn, saw sunset glow,
Loved and were loved, and now we lie
In Flanders fields.

Take up our quarrel with the foe:
To you from failing hands we throw
The torch; be yours to hold it high.
If ye break faith with us who die
We shall not sleep, though poppies grow
In Flanders fields.

It is in returning to that poem written during the “war to end all wars” that so many across the English-speaking world mark the sacrifices of soldiers not only in that war but in those that came after it, and those that keep coming. The 20th century was notable for the great technological progress made by humankind, and much of that progress was speedily employed to bring death on scales hitherto unheard of, both in the fields of war and in the realm of state tyranny. On reflection, we would realize it’s always been that way: people just got especially good at it in the 20th century. Is there any reason to think the 21st century will prove an exception to the trend?

Unfortunately, the evidence of human nature changing for the better seems a little hard to come by. And on the other hand the evidence for weapons of war of maximum lethality getting into the hands of those eager to employ them is all around, both in the headlines and between the lines of stories that get little attention.

McCrae’s poem, more resonant with each passing year, will continue to echo and frame new sorrows. There is something about what occurred in Word War I that foreshadowed later catastrophes. But the existence of such poetry reminds us that, as long as we can still seek worthy words to say, all is not lost.