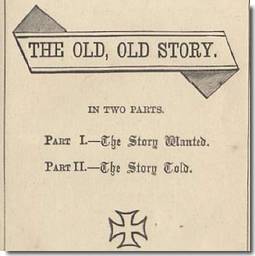 The lyric to “I Love to Tell the Story,” a much beloved hymn, was derived from a poem written by an Englishwoman named Arabella Katherine Hankey in 1866, when she was convalescing from an illness at the age of 32. The full poem has 100 verses, and is divided into two parts, “The Story Wanted” and “The Story Told.” In the first part someone “weak and weary” is pleading to hear the “old, old story” of Jesus. In the second part, another voice tells the story, beginning with the fall of Adam and Eve and then jumping quickly to Bethlehem. Both parts inspired hymns; the first inspired “Tell Me the Old, Old Story,” with a tune by Willam Howard Doane. Both are beautiful and have been popular for around 150 years now, but I suspect the second one, “I Love to Tell the Story,” with a tune by William G. Fischer, is somewhat better known and loved at this stage. Instead of a tone of pleading, it offers one of uplift (which we all can do with) and the soft and subtly mournful melody is a counterpoint which ensures that the song evades any hint of smugness.

Tennessee Ernie Ford recorded both songs, and so currently affords an easy side-by-side comparison via YouTube at these links: “Tell Me the Old, Old Story” and “I Love to Tell the Story.”

A rendition of “I Love to Tell the Story” that I find supremely touching is the one embedded below, which is a live performance by Emmylou Harris and Robert Duvall. Duvall had included the song on the soundtrack album for his 1997 film, “The Apostle,” a labor of love that he directed, wrote and starred in. As a singer, suffice it to say that he is no Tennessee Ernie, but the performance proves something I’ve long suspected: Emmylou Harris can make anyone sound good. She’s a wonderful singer on her own, a great interpreter and a fine songwriter, but the effect she produces when she duets and harmonizes—in particular with any male vocalist—is magical and devastating in a way that is uniquely hers.

I love to tell the story,
’Twill be my theme in glory,
To tell the old, old story
Of Jesus and His love.

I love to tell the story, for those who know it best
Seem hungering and thirsting to hear it like the rest;
And when in scenes of glory I sing the new, new song,
’Twill be the old, old story that I have loved so long.