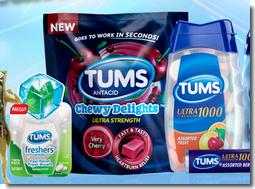 However strange one might think it that the president of the United States was first reported to have been sent to the hospital today for “a sore throat” and afterwards was diagnosed with “acid reflux,” it seems an opportune time to share a bit of knowledge I wish someone had shared with me much sooner.

In particular, this piece of advice ought to be shared on every bottle of TUMS® or ROLAIDS® or PEPCID® AC® or [fill in your own preferred over-the-counter antacid preparation]. Informing people of this, however, would necessarily reduce the sales of such substances; so, even in the information age, this information is not very commonly available.

I came to learn it myself through a simple but costly quirk of fate. (The knee bone, it turns out, is connected to the stomach bone.) A few years back, I developed some trouble with my left knee. For a time, there was some pretty bad pain, a degree of swelling, blah blah blah. Naturally I ignored it, and this treatment worked pretty well, as the pain lessened (the ignoring regimen usually works better than anything else). However, after some months, it was clear it was not going to go away, and the chief problem was that the pain was flaring up and keeping me awake at night. Research on the internets had already led me to suspect that it was a torn cartilage—and I figured I had probably obtained it while squatting down (and falling over) to play ball with my little dog—but I went to some high-flying young orthopedic surgeon on Fifth Avenue to confirm the diagnosis. (The ol’ medical insurance was still worth something back then.) I had the requisite scans, and became great friends with the surgeon’s assistants and technical aides before the surgeon whooshed into the room and honored me with his own presence for about two and half minutes. He opined that I had a tear in my meniscus cartilage, and then spewed a remarkably articulate and compressed characterization of the nature of cartilage, and knee-joints, and the nature of the surgery to repair same. He looked at me as if I were not so much a person as a cardboard cutout of a human being: one who he was fully ready to improve with some additional cutting out.

Being opposed by nature and upbringing to gratuitous surgery, I conjured one question: Are you 100% sure I have a meniscus tear? The impressive surgeon responded with an air of hardly-having-the-time-for-such-nonsense that the scan indicated a 95% certainty of a meniscus tear, but that there was no way of being 100% sure until the surgery actually took place. Put another way, “We have to open you up before we know what’s inside you.” And then, of-course, it just comes down to who the witnesses are and whether anyone really cares what happens so long as the bill gets paid. (I apologize if I sound cynical, but I can assure you that this side of me only comes out on those rare occasions when I have to deal with human beings.)

I had no great reason to disbelieve the diagnosis, but, as I had some trouble with the tone of the proceedings, I did not immediately schedule the surgery. The prospect of the recovery period (surgeons never emphasize this but I’d done my research) was a factor. And another factor was my growing realization that sleeping on my left side (the side with the painful knee) was a factor aggravating the nocturnal flare-ups. Being very much a side-sleeper rather than a back-sleeper, the alternative was to favor sleeping on my right side.

As difficult as it may be to control one’s behavior while asleep, it was not long before I was spending the vast bulk of the nighttime hours on my right side. The pain in the left knee at night went away accordingly, and the pain during the day became even more negligible. The notion of paying someone a lot of money (even if it were allegedly “somebody else’s money”) to cut into my knee with sharp implements became less and less attractive.

And so life became great. Until the heartburn arrived. Which it probably did very early on, although I had no reason to connect it to any change in my sleeping habits. The standard reasons we are supposed to presume for heartburn (which at an extreme and/or presidential stage is characterized as “acid reflux syndrome”) are eating or drinking too much and/or too late. I could not give myself a total pass on these factors, and so I sought out no others. Instead, I just sought out antacids. And I continued sleeping on my right side almost exclusively, which did wonders for the knee. (I was skipping and jumping like a foal in the summertime.)

This scenario of amazing litheness during the day coupled with unbearable bile at night went on, and on, until—I know not exactly why, but I know that it was at the point of death—I somehow started vaguely wondering whether the two were connected, and specifically searched out the the notion of whether sleeping on one side or the other could possibly affect the experience of indigestion.

I will not now stuff you full of heartburn-inducing links, but check no less than the alleged paper of record for more on the subject. Suffice it to say that it has been noted by multiple studies that sleeping on your right side—which I was going far out of my way to do—encourages “acid reflux” and related conditions. Sleeping on your left side by contrast encourages the stuff to go down where it’s supposed to go. It is simply a fact of human physiology (albeit one you will never learn by reading the advice on a bottle of antacid pills). In the normal course of things, a human being who favors sleeping on his or her side will roll over so that (all other things being equal) it all balances out. But by forcing myself to sleep almost exclusively on my right side for the sake of the knee, I had upset this equilibrium.

On correcting this, the relief was immediate. And the knee (you’ll be happy to know) had long since calmed down so that going back to sleeping on the left for a good part of the night did not cause it to flare up anew.

As difficult as it is to imagine that the current resident of the White House would be inclined to favor his right side over his left, we at THE CINCH REVIEW in any case offer him this advice: Lean to the left, Mr. President, at least when you are in your bed. The last thing we need in Washington is any more bile than is already floating around.

Please God that these words come not too late.