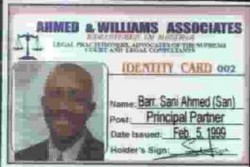 Every day there are more of those intriguing offers in one’s inbox from friendly Nigerians with too much cash and too few bank account numbers. This is just about one such offer, and the response.

I am BARRISTER ALHAJI AHMED (ESQ) Solicitor and Notary Public. I am the Personal Attorney to Mr. FREDRICK SEAN, who is a National of your country, who used to work with Oil Company in Nigeria. On the 21st of April 2002, my client, his wife and their only son involved in a car accident along Sagamu/Lagos. Unfortunately, they all lost their lives in the event of the accident. Since then I have made several enquiries to locate any of my clients extended relatives and this has also proved unsuccessful.

After these several unsuccessful attempts, I decided to trace his
relatives over the Internet, to locate any member of his family … [etc etc]

Since I have been unsuccessfully in locating the relatives for over some years now, I seek your consent to present you as the next of kin of the deceased since you bear the same name with him, so that the proceeds of this account valued at $10 million dollars can be paid to you for both of us to share the money; 55% to me and 35% to you, while 10% should be for expenses or tax as your government may require.I have allnecessary legal documents that can be used to backup the claim.

Please get in touch with me through my email to enable us discuss further and i will also like you to indicate your interest by sending your:

With these informations from you,we will proceed with this transaction as the next of kin to late Mr Fredrick.

Shocked and shaken, I responded later that day:

I am devastated to hear of the tragic death of my dear brother, Mr. Fredrick Sean, along with my sister-in-law and beloved nephew.

Yet, I have to admit that the cause of death does not surprise me. Fred always had a lead foot and a schoolboy’s disregard for the rules of the road. That, coupled with the lack of so much as a Christmas card from him during these past 6 years had already made me fear the worst.

I just wish that he had restrained his daredevil inclinations while transporting his precious wife and son. Sadly, this is an end that is all too in character for a man whose life was devoted largely to acts of dissipation, degeneracy and extreme selfishness. Indeed, it was a surprise to the rest of us Seans on this side of the Atlantic that his marriage held out as long as it did. He always said that he was not cut out to be a husband or father, and it was an assertion vouchsafed by his behavior.

During a tear through the Ivory Coast and Liberia, back in the early 1990’s, I have it on firm authority that he was responsible for the deaths of at least 22 men, and the birth of perhaps twice as many. (Fortunately for you and me, Mr. Ahmed, my brother was of-course not the type to be pinned down by any paternity suits.)

Despite his shortcomings, however, my brother will be missed not only by his family but by friends and acquaintances scattered everywhere from Monte Carlo to Bali. He lived a life both passionate and fast-paced, and in the satisfaction of his many appetites he spread his wealth widely amongst innumerable comrades and service professionals. Of-course, when I say “his” wealth, I really mean the Sean family’s wealth—it being a fortune accumulated through generations of success in the tartar sauce industry. Fred never earned an honest (or for that matter dishonest) dime in his whole life. Excessive devotion to work was the one vice that left him entirely unsullied—he simply drew on the family wealth at will, leeching off the rest of us when he had spent his own inheritance. The $10 million you mention was itself wired to his account by my very self in April of 2002. As much as we disapproved of his lifestyle, we Seans are nothing if not believers that blood is thicker than water. Besides, he had a wife and son to support. The $10 million was expected to last him through June of that year. His failure since then to request more money was certainly another very bad portent as to his health. Ah, Fred, rest in peace, beloved and terrible brother of mine!

Of-course, Mr. Ahmed, given the facts as you now know them, you understand that any split such as you described, with 55% of the money going to you and only 35% being returned to me, would be entirely inappropriate. Indeed, in some quarters it might even be considered to have a whiff of illegality. I will inform our accounting department that you have $10 million dollars belonging to the Sean family and they will be in touch to arrange your timely and complete payment. I understand, however, that your intentions were the best, and I do appreciate the great industry you have shown in tracking me down via the internet. My brother never was one to keep neat records. In recompense for your time and effort I propose to make a one-time payment to you of $100 (U.S.), and to send to you via air mail a beautiful gift pack of assorted tartar sauces. I can also ensure that your name is added to our mailing list of preferred individuals so that you will not miss out on our many special offers.

All I need for now is your full name, address, date of birth, bank account number and mother’s maiden name. As soon as you furnish these “informations,” my agents will be in touch with you to arrange the satisfactory conclusion of our business.

Hearing that he had actually contacted the true brother of the late Mr. Fredrick Sean did not unduly deter Mr. Ahmed, and another email was received from him before very long: (Go to page 2)