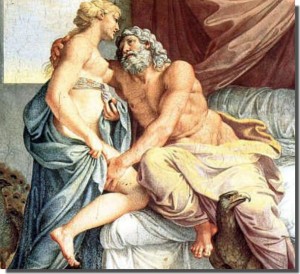 Some female priests of the Church of England are reportedly advocating that liturgical texts ought to be changed to sometimes refer to God as “She,” instead of “He,” on the basis that God has no gender, and that to consistently refer to God as “He,” as has been traditional in Christianity, conveys the idea that maleness is somehow more divine, and that women are therefore lower on the spiritual ladder.

Are they in fact right? Is God a he or a she? And if he/she isn’t a he or a she, is the best solution to refer to him/her alternately as him or her? Or how about it? How about it, indeed.

There is something of an irony in that this push is apparently coming from women who have already been ordained; i.e. any prejudice against the spiritual soundness of the female of the species based on using male pronouns to refer to God seems not to have won out in their case. They are free to be pastors, to teach and to preach and to administer the sacraments just as male Anglican vicars have always done, and to become bishops and so be in a position of leadership with respect to other ordained ministers, male or female. They would seem to be the last women in the world who need to complain of being held back by old fashioned patriarchal religious language.

On the most basic question, as to whether God has a gender, although yours truly hasn’t studied theology at any high-falutin’ seminary or college, I think I can connect the dots on this one. First, we need to stipulate that we’re talking about the biblical God, the God of Abraham, Isaac and Jacob (and Sarah, Rebekah and Leah). “In the beginning, God created the heavens and the earth.” That’s Genesis 1:1. God created everything; therefore God also exists outside of everything, and transcends space and time as we can possibly ever understand these things. Although it is not for us, as God’s human creatures, to impose on God what God can and can’t be, God has endowed us with some gifts, including the capacity for logic, and it’s patently logical that God, transcending everything, cannot possibly be limited by virtue of any gender or genitalia, things that God created. (Although, as elucidated lately by Mark Steyn, one is hopelessly behind the Zeitgeist if one believes there is anymore a relationship between gender and genitalia … but that’s a whole other bag of beings.) On the simplest level, if God were male, then out there transcending all space and time would also have to be a “Mrs” God. Just as with love and marriage, you can’t have one without the other.

Yet, although making it clear as a matter of logic that God cannot be limited by the concept of gender, the Bible does consistently refer to God by way of male pronouns, and sometimes as “father.” In the Old Testament, Wisdom is personified in the Book of Proverbs with female pronouns, and some might draw a parallel between this and the Christian notion of the Holy Spirit. There are also some feminine metaphors employed in relation to God over the course of the scriptures, but all in all this adds up to a thin thread to use to try to maintain that the Bible is any way ambivalent about God being a he rather than a she.

And for Christians there is also the fairly unambiguous fact that Jesus of Nazareth was a male, and conventional Christian belief (even still, at least officially, within the Church of England) is that Jesus was (or more accurately is) the incarnation of God. And Jesus frequently referred to God as “father,” not only in the sense of being his own father but in the sense of his being the father of everyone.

This all being the case, it follows that to begin referring to God on occasion using feminine pronouns necessitates changing the language of the Bible, from which many liturgical texts come and which left unchanged would clash with such usages. And indeed Bibles have been changed. Already there are translations of scripture being used in the mainstream which go out of their way to maintain a gender neutral stance with regard to God, by simply avoiding pronouns. Instead of “he,” you can just always say “God,” and instead of “his,” you can say “God’s.” It can get a wee bit impersonal, of-course. But, aside from that small issue, why not do it? If we know, philosophically speaking, that God cannot be male or female, why not correct the texts to reflect this? Or, as is being proposed, why not alternate at will between he and she in order to achieve some kind of gender fairness?

I think that the problem with doing these things is that Christians do not worship a God of the philosophers, but by definition worship a God who has chosen to reveal himself (forgive the pronouns from here onwards) in a particular way through his relationship with the people of Israel, and in a particular way through his incarnation as the Son. Anyone, if blessed with the necessary insight, may see God reveal himself in a flower, in a pebble, or in a drop of water, because God is in all of those places, but being Christian means accepting the special way God has chosen to be revealed in the Bible, and there is a great gift in being able to endlessly ponder the mysteries in that revelation. What is revealed is a God that is not merely the minimum-philosphically-necessary-ultimate-deity, but a God who inexplicably loves us, who is actually deeply concerned with our fate. This is very mysterious and worthy of pondering.

If, on the other hand, we just decide to eliminate things in this biblical revelation which don’t appear to make sense to the logical parts of our minds, then we’re giving up the pondering; we’re instead stating that we understand it all already, and that now we can just start remaking it to suit ourselves.

And the nature of God’s revelation in the Bible is special in an additional way that ought to be a source of delight (and is so maybe especially to someone like yours truly who likes to read and who writes a little bit). This delight is in the mysterious fact that—if you indeed accept the Bible as a special revelation of God—God has chosen to reveal himself by way of literature, written by human beings. That is, unless you were one of the relatively tiny number of people around to witness the significant events, the only way any of us knows of them is by reading what others have written about them. God didn’t set up an obelisk out in the desert with speakers attached blaring the divine truth; he doesn’t have a TV or radio show. Jesus didn’t wait to come until he could be recorded on someone’s cell phone. Neither did Jesus sit down and write a long theological tract to leave behind, explaining everything with each “i” dotted and “t” crossed. Why didn’t he? It’s a mystery, but, if you’re so inclined, it is a delightful one, that God has depended upon people (however inspired) to recall, extol and record the moments of revelation, from Sinai to the Sermon on the Mount and beyond. So the nature of that revelation as literature is a special and precious mystery. By its own nature, it has to be telling us something. The books of the Bible can be reflected upon, interpreted, analyzed, criticized, contextualized, exegeticized—you name it, and it’s been going on for thousands of years; new translations can be made based on better understandings of the ancient languages or to bring older translations in line with modern English usage—no problem; but, again, if the aim is instead to change the original text, to say in effect that it just doesn’t apply anymore, that we can do better now, then the value and mystery of this special revelation through literature is being tossed out.

In the lingo of the moment, God “identifies” as male in the Bible. How someone identifies, according to current cultural mores, is supposed to be the last word on such matters. We just deal with it. We certainly don’t try to change it. Nevertheless, we are and should be free to think about it, and this fact of God being “male” can be dissected, analyzed, categorized and so on. One can think about it for oneself and/or find out what others have thought about it. There may be resonances in it that are valuable and/or imponderable. There’s literally no end to what can be thought and said about it, if one chooses to go that route.

On the other hand, we are also not precluded from concluding, a là Cole Porter, that it is just one of those things …