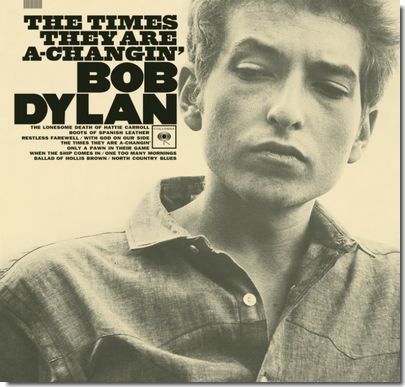 “With God on Our Side”, a song which Dylan wrote in 1963, is commonly referred to as one of Dylan’s great anti-war songs. I’d like to explore some of what my ears tell me is going on in this song, which I would certainly consider to be a very great song, though as to its anti-war message, well, more anon.

Time for a gratuitous Dylan quote:

Myself, what I’m going to do is rent Town Hall and put about 30 Western Union boys on the bill. I mean, then there’ll really be some messages.

Those who like to hear “With God on Our Side” as an anti-war song generally really tune into and recall the first seven verses. Verse 1 can be heard as an introduction (Oh my name it is nothin’/My age it means less). Verses 2 through 7 itemize (poetically) a series of wars that the United States Of America has fought, from the wars against the Indian nations to a possible future war with the Russians, with “weapons of the chemical dust.”

Each verse ends with a variation on the statement that “God’s on our side.” Like so many Dylan songs, it is structured in a breathtakingly effective way. It starts out with a tone of sincerity, with reference to growing up in the American midwest and abiding by the laws and believing that the land has God on its side. After all, we do sing (even leftists on occasion), “God Bless America,” and Irving Berlin is, maybe, a bit player in this song somewhere. There’s nothing wrong with wishing for God to help you and bless your country, and if you’re wishing it, then you’ve got to believe that it might be so.

However, soon enough, as the conflicts are detailed, the notion of God being on our side takes on a bitter irony. Much more so when the wars themselves leave unanswered questions: “The First World War, boys/It came and it went/The reason for fighting/I never did get.”* And the Germans “murdered six million/In the ovens they fried,” but they now too have “God on their side.”

By the time Dylan gets to the end of the seventh verse, “And you never ask questions/When God’s on your side,” he’s written a song that could reasonably be characterized as an anti-war song. The notion of God being on our side has arguably drifted beyond mere irony, to wet, dripping sarcasm. Many are happy to hear it like that, and to sing it like that, and to conclude that God has not been on America’s side, ever, and that war is always wrong.

But this is where Dylan is just about to show why he is a songwriter for the ages, rather than a mere commentator on the times. The repetitive and powerful litany of wars comes to an end, and out of nowhere we hear this astounding verse:

In many a dark hour
I’ve been thinkin’ about this
That Jesus Christ
Was betrayed by a kiss
But I can’t think for you
You’ll have to decide
Whether Judas Iscariot
Had God on his side.

How do you react to this, if you’re taking “With God On Our Side” as a straightforward anti-war song? What the heck does Judas Iscariot have to do with anything? He didn’t fight in any war. Hell, he’s not even an American.

Well, if you wanted to, you could perhaps write a whole book on this verse. But let’s just consider the question that Dylan is posing here at the end. That is: did Judas Iscariot have God on his side? (“I can’t think for you.”)

Let’s follow the path that the question demands. Initially, such a question seems absurd – Judas was the sneaky villain who gave Jesus’ location away to his enemies, thereby sending him to his death. He couldn’t have had God on his side, right?

Almost immediately however, if you understand or care about Christianity, you’re forced to think again. Jesus’ death was neither an accident of fate, nor a crime due to the villainy of a few specific people. His death was part of God’s plan to redeem humanity. So, if Judas had not acted as he did, would God’s plan have been obstructed? Was Judas therefore acting according to God’s plan? In a certain sense, was God on Judas’ side? Yet, the Bible says that “Satan took possession of him.”(John 13:27) How could God lead someone to the devil, and to evil? He couldn’t—surely to say that would be blasphemous. Yet the Bible also says, in the words of Peter: “‘Brethren, the Scripture had to be fulfilled, which the Holy Spirit foretold by the mouth of David concerning Judas, who became a guide to those who arrested Jesus.'” (Acts 1:16)

This isn’t a simple question to answer, for those that concern themselves with such things. God surely did not lead Judas to commit a sinful act, especially if we believe in human free will, and yet it was an act which was predicted by Scripture, and also one which occurred to fulfill God’s plan to save humanity.

One way of considering this is to reflect on the fact that God’s purposes are not our own; they are, in fact, His. On September 25th, 2001, Bob Dylan sat with a journalist from Rolling Stone, in a promotional interview for his new album, Love And Theft, which as it happens was released on September 11th, 2001. In the midst of a discussion about something Bob had said in the past at an awards show, Dylan said this:

You hear a lot about God these days: God the beneficient; God, the all-great; God the Almighty; God the most powerful; God the giver of life; God the creator of death. I mean, we’re hearing about God all the time, so we better learn how to deal with it. But if we know anything about God, God is arbitrary. So people better be able to deal with that, too.

So then, what does it mean to have God on your side? Is God ever really on your side? Or is that a silly question? It must be believed that God is carrying out His own higher purposes, which we can’t comprehend, but in which we somehow figure, by virtue of our existence. Yet, in a personal sense, as a believer, one trusts in God to be on one’s side in His love and in His will to offer redemption. This is rather different, however, to the question of God being on the side of a nation. “The nations rage” while “He who sits in the heavens laughs”—so it is written in Psalm 2. Perhaps, as a believer, one should be more concerned about whether one’s own nation is on God’s side, in the scheme of things. God works through history, surely, but not necessarily in the way the individual believer would like Him to at any given time.

This is where the 8th verse of this “anti-war” song has led us—to these kinds of questions. And there’s one more verse to come:

So now as I’m leavin’
I’m weary as Hell
The confusion I’m feelin’
Ain’t no tongue can tell
The words fill my head
And fall to the floor
If God’s on our side
He’ll stop the next war.

“If God’s on our side/He’ll stop the next war.” Yet, if we’ve considered the questions from the previous verse, we’ve realized that the whole idea of God being on our side, especially in a national sense, is one that might be fraught with error. There is no real expectation that God will step in and “stop the next war.” Perhaps that’s why the words “fall to the floor.” It’s implicit that wars will continue to happen.

Anyone who thinks that I’m giving excessive weight to the last two verses should ask themselves what “The Lonesome Death Of Hattie Carroll” would be without its last verse, or indeed “Boots Of Spanish Leather” without its last three. If you’re willing to hear the carefully expounded set-up, but you reject the denouement, what exactly would you be choosing to hear? (Heard ten thousand whisperin’ and nobody listenin’)

So, from seeming to be a fairly run-of-the-mill anti-war song, this has transformed itself into a song which instead weighs the question of God’s purpose in our existence, and our purpose in God’s plan. Given the last two verses, in fact, you cannot consider this to be an “anti-war” song at all. Why write an anti-war song if you have no confidence that war will in fact end?

As Dylan says somewhere else, “every question/if it’s a truthful question/can be answered by askin’ it.”

“With God on Our Side” is a song which will never grow old, because it asks questions which will always be worth asking, and it goes far beyond any attempt to pigeon-hole it as a piece of simple, left-wing, anti-war screed. I don’t possess the final answer to the questions posed, and wouldn’t deign to suggest a politically “conservative” answer in this space.

However, I’d suggest that it is indeed a very great song, and it is also, thankfully, a song that belongs to all of us.

*as sung by Bob; the published version is “Oh the First World War, boys
It closed out its fate
The reason for fighting
I never got straight”

I think he made the right choice with the version he sings.