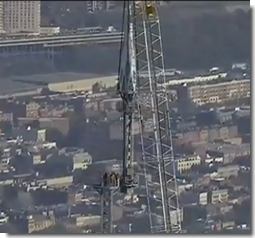 It’s been a long time coming, but it’s there now, nearly twelve years after the September 11th attacks which brought down the Twin Towers. Watching the spire put into place, it’s a reminder that this is how big things are achieved: metal on metal, on concrete, on bedrock, time after time after time. It is difficult and dangerous work and it is an amazing effort of vision and will and strength on the part of so many people. It’s hard to build big buildings. The people who took the World Trade Center towers down could not have erected them in a thousand years. To destroy these American buildings, they had to use American jetliners, cutting people’s throats with blades to take control of them. That defines where such people stand and what they stand for. If they can, they ought to change their hearts and their minds and look to create and to foster life, instead of destroying and killing in the name of their death cult. Meanwhile, in a clearly tangible answer to their hatred, the skyscraper goes up in place of the one they brought down, all 1776 feet of it, the tallest building in the western hemisphere today.

It was originally supposed to be called “The Freedom Tower” but that must have spooked certain people, so now it’s just supposed to be called “One World Trade Center.” At first I thought “Freedom Tower” was cheesy, but then I got used to thinking of it as such, and no longer thought it cheesy. So this New York City resident hopes that it will indeed be the Freedom Tower in common usage, and that one day this compels the owners to change the official name.

Long may it stand.