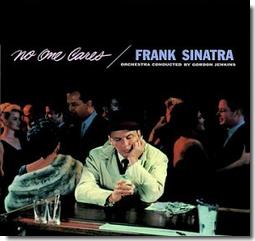 In a career not short on greatness, “Why Try to Change Me Now” is an especially great Frank Sinatra song, and a great Sinatra moment, all the more so as it is actually two moments: two great studio recordings. There are of-course many songs that Sinatra recorded twice (and more) and they’re always very good for providing a window into how he developed as an artist, as this one is. It can also be noticed that the songs he revisited through his career are all great songs. He recorded his share of cheesy or schlocky tunes over the years—a few of which were big hits, indeed—but each of those he recorded just once.

His first recording of this tune was in 1952, and it was his final recording for the Columbia record label.

Sinatra had signed with Columbia in 1942, at the age of 27, after leaving the Tommy Dorsey band, and it was during this era that he came to be known as The Voice, and what a voice it was. Although no longer as purely angelic as on some of those great Tommy Dorsey sides, Frank’s voice wasn’t straying in these years so very far from paradise; it was deeply romantic, and he could conjure with it just the sufficient level of ache when needed. It was the voice that brought out the bobby-soxed girls and made them faint (and worse). But it was a voice anyone could appreciate, with wonderful expressiveness and the remarkable vocal and breath control that Sinatra had worked for years to achieve. It can be heard at its best on the great ballads that Sinatra sang in those Columbia years, like “I Fall in Love Too Easily,” “She’s Funny That Way,” “Try A Little Tenderness,” and “I’m Glad There Is You,” often with the great Axel Stordahl conducting and breaking new ground in the musical framing of a vocalist. Sinatra could swing pretty good too, on tracks like “S’Posin'” and “Five Minutes More,” even if he would find his best shoes for swinging years later with Nelson Riddle and Billy May.

On that final recording date in 1952, the bobby soxers and the acclaim must have seemed to be in the very distant past. His divorce from his first wife, Nancy, and his relationship with actress Ava Gardner had knocked him off any angelic cloud in the popular consciousness, and he’d been struggling as a recording artist and performer. He’d been let go by not only his record company, but also by his movie studio and talent agency. He’d been having real problems with his all-important voice, having difficulty just getting through performances. For his own part, Sinatra maintained that he was glad to get away from Columbia Records: he’d fought for years with producer Mitch Miller over matters of taste, Miller being very fond of novelty records (most infamously represented in Sinatra’s case by the record “Mama Will Bark“) and had to have been dreaming of the freedom to record just what he wanted, just how he wanted. The only problem was that he had no replacement record contract and poor prospects for one. No one on earth could have predicted then how well Sinatra would be doing in just a few short years, following his own muse (albeit ably abetted by other great talents in the studio). 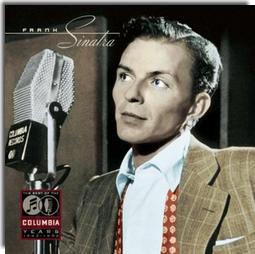 The title of this song, “Why Try to Change Me Now,” seems almost too pat in retrospect as his final turn at the microphone for the record company that he’d felt was trying to change who he was as an artist. But it being Frank Sinatra with a great song in his hands, the record is far, far more than merely a gimmicky goodbye.

The composer, Cy Coleman, noted that Sinatra slightly changed the melody at the opening of the song. He is quoted by Will Friedwald (in the best book I know on Sinatra):

I listened to the record and it sounded so natural, the way that Frank did it, that I thought to myself, “He’s right.” So I left it that way. So I changed the music! That’s the first and only time I’ve ever done that.

The arrangement was by Percy Faith. You can hear the record (or at any rate a digital shadow of it) via iTunes, via Amazon, and currently via YouTube.

I’m sentimental, so I walk in the rain
I’ve got some habits even I can’t explain
Could start for the corner, turn up in Spain
But why try to change me now?

It is in this verse, the next verse and the bridge the song of a misfit, someone who feels himself a bit off-kilter, something of an odd man out in the conventional, modern world. This is not such an unusual theme for a popular song: one could make a very long list of songs with similar sentiments. “Pretty Vacant,” by the Sex Pistols, would be one. “Subterranean Homesick Blues,” by Bob Dylan, would be on that list too. And both are enormous fun in their distinct ways. But the beauty and grace of this take on the theme is just that much more conspicuous when you compare it to such others. There is a restraint in the anguish and alienation that is being expressed with merely a wry shrug (as opposed to a molotov cocktail) and there is no singer better able to distill and express that than Frank Sinatra. His voice is beautiful here, but, knowing where he was at in his life, you can just read the great weariness between the lines.

And then there is the final verse, where the song reveals itself as being addressed in just one all-important direction:

So, let people wonder, let ’em laugh, let ’em frown
You know I’ll love you till the moon’s upside down
Don’t you remember I was always your clown?
Why try to change me now?

It is a plea to someone whose acceptance matters more than all the rest of the world. And Sinatra voices that last questioning couplet with an exquisitely unstrained sense of yearning and of heartbreak. It is inexpressibly masterful.

Envision, if you will, a tragic twist of fate or two, and this might have been the last record Frank Sinatra ever made.

But, thank God, it was not. And seven years later, in 1959, Sinatra was standing in front of a microphone to sing “Why Try To Change Me Now” again, this time for his album No One Cares.

In the preceding years, under a new contract to Capitol Records, Frank Sinatra had recorded masterpiece after masterpiece, and along the way defined the potential of the long-playing record in popular music. In the Wee Small Hours, Songs for Swingin’ Lovers, Only the Lonely, Come Fly with Me: these and others can be seen now not merely as great records but irreplaceable cultural treasures. (We’re lucky indeed that millions of copies exist.) Sinatra’s very voice had changed; it had gathered maturity, acquiring some cracks that weren’t there before but only an ever-deeper capacity to communicate a song to a listener. Working with brilliant arrangers and musicians, but commanded finally by his own discerning vision, Sinatra recorded some of the most refined, truly adult and simply marvelous popular music that has ever been committed to any medium, before or since.

By this point, he was coming close to the end of this near-perfect run (though he had lots of great stuff still to come). No One Cares was without doubt one of his “mood” albums, the mood succinctly expressed in the title. For these LPs, a crucial element was the way in which Sinatra chose songs without regard to their vintage. There were songs specifically written for the project (like the title track by Sammy Cahn and Jimmy Van Heusen) and others from decades previous (like “I Can’t Get Started,” by Vernon Duke and Ira Gershwin, from 1936). The point was to create a whole that held together, greater even than the sum of its great parts. The arranger in this case was Gordon Jenkins. He is not treated by critics as untouchable to the same degree as fellow arranger Nelson Riddle; he had an approach that could sometimes be considered a bit repetitive or simplistic, featuring what are often described as “high keening strings.” (Riddle, by contrast, was always varied and inventive.) Yet, in these years, Sinatra did not over use Jenkins’ talents. So, the two albums from this period, Where Are You? and No One Cares, stand as great examples of Sinatra’s voice framed by Jenkins’ sparse, emotive and exceedingly dark arrangements. (Ironically enough, Sinatra also called on Jenkins for his marvelous Christmas album.)

While Sinatra, in the second act of his American life, had enjoyed enormous professional success in the middle and late 1950s, he was still a human being, and other aspects had not gone quite as well. His very anguished relationship with Ava Gardner was officially ended with their divorce in 1957.

But from wherever it came, there was never much doubt that great darkness was there under the surface for Frank, and he could tell the truth about it, like no one else, when he was in front of a microphone.

So, his second recorded reading of “Why Try To Change Me Now” is taken significantly more slowly than the first, every note and syllable carefully measured out. It can be heard via iTunes or via Amazon and currently via YouTube.

Frank’s singing still possesses enormous grace and restraint, but the song is performed as if treading on a ledge that is now substantially thinner. Sinatra’s voice has that added depth that maturity has brought and at the same time some added weaknesses, and he puts all of this into play with devastating but still ultimately unstrained effect (and therein lies a crucial element of his genius).

When he reprises, in the end, the final questioning lines of the song …

Don’t you remember I was always your clown?
Why try to change me now?

… his voice conveys an expectation that is different than before. In the Columbia recording, the singer has a love, and he is at least yearning for a positive, accepting answer to his questions. Here—it seems at least to these ears—the words are sung as if to an abyss, to a lover who he wishes would answer him, but one who he knows is no longer listening …