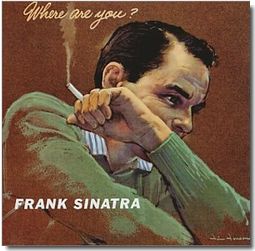 “Where Are You?” is the title track of the first of the two dark albums that Frank Sinatra recorded during his 1950s’ artistic peak with arranger Gordon Jenkins (the second being 1959’s No One Cares). It’s funny: Sinatra himself was known sometimes to refer laughingly to his loneliness-themed concept records as “suicide albums,” but when he was behind the microphone he was clearly nothing but totally serious about each syllable and every note, and was masterful at constructing these albums with an almost terrifying emotional precision.

All of that would have to start with the selection of songs. “Where Are You?” was a song written by Jimmy McHugh and Harold Adamson in 1937 for the film Top of the Town. It was introduced by Gertrude Niesen (and at the moment you can hear all 78 rpms of her rendition via YouTube).

The song treads riskily on an interesting line (I think) between poignancy and blandness. The lyric is so very straightforward, so plain, so seemingly devoid of device, that its very plainness is its only device.

Where’s my heart?
Where is the dream we started?
I can’t believe we’re parted.
Where are you?

When we said “goodbye” love,
What had we to gain?
When I gave you my love
Was it all in vain?

Gertrude Neisen ends her performance with a big wail of the only line of the song that is especially affecting on paper and on its face: “Where’s my heart?”

I’m not trying to insult the lyricist, Harold Adamson: there’s a great value in being direct, and this song is that in spades. There are other Harold Adamson songs that Sinatra also recorded, the wonderful “Around the World” (Come Fly With Me), and the lovely “I Couldn’t Sleep a Wink Last Night” (Close To You). Both of those lyrics have a beautiful directness, but “Where Are You?” really just lays it out there. It presents a certain challenge to a singer to make it interesting, instead of it just coming across as one (lyrical) note all the way through.

The words are carried upon Jimmy McHugh’s sweeping, symphonic melody, and Gordon Jenkins makes that soar behind Sinatra with his haunting strings and woodwinds.

In one sense, the song is ideal for Sinatra, in that it is in this conversational and direct English; but Frank of-course had the ability to make the most obtuse lyric sound conversational. 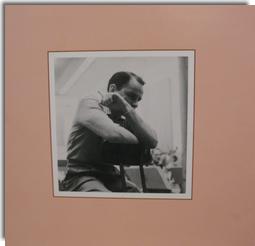 So how does he sing this? (A digital shadow can be heard via iTunes, via Amazon, and currently via YouTube.) He sings it slowly, behind the beat, drawing it all out. He does not begin at any high emotional level, but is indeed conversational, with that line “I thought you cared about me” sounding not accusatory but only lightly chiding, offhand. The passion rises for the following “Where are you?” but as quickly comes down again, and then he is wooing, not wailing, on those lines “Where’s my heart? Where is the dream we started? I can’t believe we’re parted.” He continues treading on this thin rope of emotion, as if speaking to his love and not wanting to frighten her with any hint of craziness or desperation, not wanting to reveal himself, tempering the bluntness of the song’s questions with the softness of his approach. Under the surface is something else, and it comes out when he comes around the second time on the line, “Was it all in vain?” That word, vain, goes on and on, and there is that anguish, now naked: it is all in vain.

There’s no point pretending after that, yet still he gathers himself back, not overdoing it, as he sings again, “Must I go on pretending?” The final “Where are you?” comes out with heartbreaking resignation, one long line, on one breath.

And so Sinatra finds levels in the lyric that don’t jump out on paper to a schlub like me, and would be hard to detect in the average musical performance. It’s just about sadness, right? Pining for the one you love? But no; it’s also about the games we play to hide our feelings, and it’s a little about romance and a bit about seduction; the desperate pain at its heart finally comes through like a knife but doesn’t cut away everything else that Frank revealed in the song.

Of-course, it’s a remarkable performance, from a singer like no other.