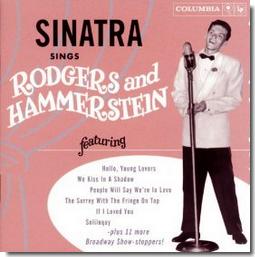 “Some Enchanted Evening,” by Richard Rodgers and Oscar Hammerstein II, is not a song owned by Frank Sinatra, in the sense of him having recorded a version so definitive that others wilt before it. It’s been recorded by way too many singers and sung on far too many stages in productions of South Pacific for that to possibly be true. However, Sinatra recorded it on three separate occasions during his career, qualifying it at least as a special number for him. He recorded it first in 1949 for Columbia Records, when the song was brand new, and was being recorded by a whole clutch of competing singers, as was the way of the music world back then. Sinatra’s version hit number six on the U.S. hit parade, but Perry Como’s got to number one. Sinatra revisited the song in 1963, as part of his “Reprise Musical Repertory Theatre” series, where he and musical cohorts like Dean, Bing, Sammy and Rosemary Clooney got together to record sets from several great musicals, including South Pacific. And then he took it on again for his 1967 album (also on his Reprise label) The World We Knew.

In the context of the musical, the song is a recurring romantic refrain which underlies and lifts the love story between a middle-aged man and a younger woman. Divorced from that, as a popular song, it sounds like gentle advice from someone who has lived and loved and lost and maybe loved again, urging those who are younger to seize that enchanted moment when it arrives and hold on to the love they have found. So, one might assume that the older Sinatra would have pulled it off better. But I don’t think so. I think that Sinatra’s first recording in 1949 on Columbia, arranged by Axel Stordahl, is the best of the three. It’s true that Sinatra was relatively young (34), but because his voice then had a kind of celestial quality, he could pull off a song like this one quite well, as if issuing the profound guidance contained in the words from atop some heavenly cloud. (To me, that’s the same reason his Columbia version of “Hello Young Lovers” works so well, although it seems like the song of a much older man.)

The 1963 rendition (actually two takes: one with Rosemary Clooney and one without) is very enjoyable, with a light, cheerful arrangement, but it hardly distinguishes itself from so many other versions. Sinatra’s 1967 take on the song is adventurous in that it is a swinging and bopping rendition, but to these ears it unfortunately doesn’t quite get where it’s aiming to go.

So it is the simplest arrangement, the purest and most romantic reading of the song, from 1949 on Columbia Records, that this listener at least would recommend most fully.

Once you have found her, never let her go.