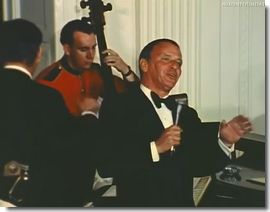 Frank Sinatra had famously announced his retirement in March of 1971, so this 1973 show was a special exception to that status … and also turned out to be effectively the end of it. His orchestra on the night was the United States Marine Band, with the great Nelson Riddle conducting (including on some of his own classic arrangements), with Al Viola sitting in on guitar and naturally Bill Miller on piano.

The film has now been made freely available on YouTube not by some anonymous zealot of a fan who digitized it from a decaying old VHS tape found in a dank basement, but by the Richard Nixon Foundation. It’s great quality, albeit a tad dark at times. It’s embedded below, and everyone must watch the entire 43 minutes, but if for the moment you can only watch a little then you might go to about the 25 minute mark and hear Frank’s duet with Al Viola’s guitar on “Try a Little Tenderness.”

[ADDENDUM 5/26/15: Well, it’s been taken down, apparently nixed by a copyright claim. I hope it sees the light of day again.]

It is truly a terrific, precious concert, with Sinatra in very fine voice, in a small room, and performing a set list of ten total winners:

(And no “My Way”! Which is why I can so easily say that it’s ten total winners.)

Outside the room swirled all kinds of political intrigue, as we know, but this occasion was all about the music. I’d also challenge anyone not to be touched by the humility and obvious sincerity in Frank’s statement about what it means to him to sing in this venue (around the 35:30 mark).

A big thank you to those who have enabled us to see this wonderful show after these years.

(More on Frank, centenary and otherwise, in our Frank Sinatra Wing.)