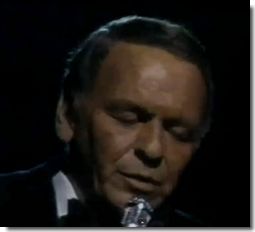 “Send in the Clowns”: It’s an odd song, isn’t it? A bit queer, you could even say. It’s not so easy to get a handle on what it’s about. But undeniably it’s also rather rich, in terms of its musical dynamics and lyrical drama, and I do think that’s why so many singers have been drawn to taking it up and seeing what they can make of it. It’s been sung by everyone from Frank Sinatra to Grace Jones to Roger Whittaker to Van Morrison to … well, maybe that’s quite enough range right there for any song to claim.

Although yours truly can therefore recognize some of its charm and attraction for singers, I’d have to attest that the song has always been all but incomprehensible to me as something other than this kind of almost academic exercise in singing a strange song. And this would have to apply even to Frank Sinatra’s recorded version (from 1973’s Ol’ Blue Eyes Is Back). There is, however, one exception, one doozy of an exception, one performance in which the song falls into place and makes complete and devastating emotional sense … so much so that I wonder at how it remains such a mystery on other occasions. And it is a performance by Frank Sinatra, just one specific live performance, on television, from 1973. It was during a show to promote the Ol’ Blue Eyes Is Back album, and the show was called, I believe, “Magnavox Presents Frank Sinatra.”

I will embed the video (currently available) via YouTube right here, and then I’ll ramble on about the intriguing greatness of this particular performance below that. I am curious how many people out there (besides me and Mrs. C.) are of a similar mind as to the unique quality of this rendition.

If you could express in words what Sinatra does in that performance, then there would be no need for Sinatra performances, and we could all just pass our time reading essays (or blog posts) instead. What he achieves there is both ineffable and inimitable, as are all the great Sinatra moments. But there are two aspects I’d highlight in any case. One is just a word: kindness. The other aspect I’d highlight is the visual one. Frank didn’t require visuals to put across a song (Lord knows his greatest records stand without any need of accompanying videos) but neither did he neglect the visuals when on stage. Sometimes even on stage the visuals may have been redundant—e.g. hand gestures that demonstrated his Italian genetics but lent little to the expression of the song—yet his fundamental desire to get the song across demanded that he use all of his faculties to do so. In this case the camera provides us with a close-up of Sinatra’s face throughout much of this rendition of “Send in the Clowns,” and so you can not only hear but see how he feels each and every word of this strange kind of song, and a lyric that seems just too idiosyncratic in so many other cases is entirely comprehended in this performance.

Whether Sinatra’s version would make sense in the context of the show, A Little Night Music, is an entirely different question, ultimately not relevant, but interesting. The composer Stephen Sondheim has been quoted as saying about “Send in the Clowns”: “I get a lot of letters over the years asking what the title means and what the song’s about”, and this is hardly surprising. He is also quoted as saying that “‘Send in the Clowns’ was never meant to be a soaring ballad; it’s a song of regret. And it’s a song of a lady who is too upset and too angry to speak” and “so it’s a song of regret and anger, and therefore fits in with short-breathed phrases.”

Listen to Sinatra’s rendition, and is there any anger there? No; there is regret, for sure, and in spades, but tempered with a sense of bottomless understanding and kindness. We’re all clowns … and isn’t it so sad and so funny, my love, and here I’m the biggest one of all—that and much that is inexpressible in my words is in there, but there’s not a hint of recrimination in his performance of the song.

Yet, that’s not the song, in a certain sense: i.e. in the sense of taking the songwriter at his word. But what’s a song without a singer? And so, as he did on so many other occasions in his career, I think Frank proved himself the indispensable singer for a particular song. And in this case I’d personally argue that it was in an especially rarefied way, in this one live television performance, where he put the song across both visually and audibly in a way that no one could have expected in advance, and in a way that no one will be able to do in the future. That’s amazing.

More on Frank, centenary and otherwise, in our Frank Sinatra Wing.