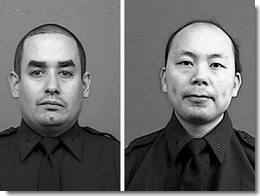 Rafael Ramos and Wenjian Liu were murdered in Brooklyn yesterday, five days before Christmas. They were shot to death as they sat peacefully in their patrol car, eating lunch, and performing duty that would have found them without question coming quickly to the assistance of anyone in trouble in the nearby public housing project, as NYPD officers do on a routine and daily basis. The church that Officer Rafael (Ralph) Ramos regularly attended was reportedly packed this morning with those showing sympathy to his bereaved family. Ramos himself, a devout Christian, was to graduate today from the New York State Chaplain Task Force. His partner, Officer Wenjian Liu, had gotten married just two months ago. He and his bride were described today by a neighborhood acquaintance as having been “quiet and clearly in love.”

On this earth (at least in what we consider free societies) judgment is supposed to be reserved for a jury; in the next world, it is for God alone, but sometimes it is all but impossible for a human being not to conclude that another human has chosen absolute perdition for himself, and the murderer in this case—having shot his girlfriend in Baltimore in the stomach in the morning, and then proceeded to Brooklyn to later coldly execute two innocent men—has earned no delay of judgment from humans. He bragged about his crime on “social media” before committing it. He bears the consequences for eternity, if this is a just universe, and some of us still believe it is.

This monster’s act of double execution comes after months of widely reported antipolice rhetoric and protest, following the deaths of two unarmed African-American men at the hands of police, one named Michael Brown in Ferguson, Missouri, and the other named Eric Garner in Staten Island, New York. Those subjects haven’t been written about in this particular space: this writer was disinclined to add to the cacophony, and felt ill qualified to say anything worthwhile, given the mess of contradictory circumstances involved. There is but one humble angle I recently had in mind to throw out there, but it can wait. I will say—with feeling today—that it would sure be nice if we had a leader at the national level who was uniquely positioned to be a force for cultural healing, rather than merely nurturing and retreading old and doomed (but politically-useful) ways of thinking … but those seem not to be the kinds of leaders we’ve chosen for ourselves as a nation. 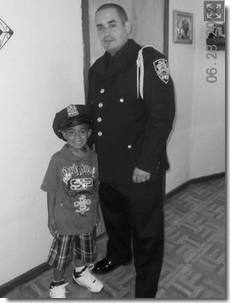 These, however, are days to remember Christmas, and families that are hollowed out by the sudden loss of someone beloved to them. Death is the one unalterable fact of life, but, if you live long enough, you experience the special pain of losing someone you love at such a sacred time, when memories and expectations of joy are so brutally brought up against the coldness of the grave and an absence that cannot be rectified. All those suffering that kind of loss deserve our sympathy and prayers, but for many New Yorkers the families and faces of Rafael Ramos and Wenjian Liu will be most prominent. That is as it should be.