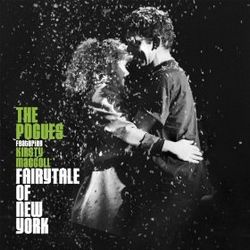 I just checked the U.K. Top 40, and the song “Fairytale of New York,” by The Pogues and Kirsty MacColl, is at number 18, having fallen three spots from last week. That might sound like a weak performance, but not when you consider that it was originally released for the Christmas of 1987 (when it reached number 2) and that this is the tenth year since then in which it has charted. This also happens to be the 25th anniversary of that original release. (Oh boy.)

“Fairytale of New York” is assuredly a unique Christmas classic. It fairly dripped with greatness and with resonance on the day it was released, and the years that have passed have only magnified the resonance, till I daresay there are many tender souls out there who waste no time and begin their crying as soon as they hear the opening piano notes. Yours truly wouldn’t be one of them, not at all. I’m made of much tougher stuff, although I have little trouble relating to some of the major touchstones of the song, such as Ireland (having grown up there from about age 7 to 20) and New York City, where so many people come with their dreams, it being my favorite city in the world (despite everything) and the one I’m currently blessed to be able to live in.

The record “Fairytale of New York” has been pondered at length and talked about and documentary’d-about, probably to excess, as I’ve recently discovered, but I feel the urge to pay it some tribute and I’ll therefore do so regardless, although briefly. I think that one of the key elements of its magic (aside from the beautiful tune and great performance) is the absence of too much narrative detail in the lyric. There are just enough words used and images dropped in to evoke this couple, arriving as immigrants to New York in a bygone decade, wide-eyed and floating on their dreams, dreams which have then crumbled and left them in the worst kind of decrepitude, snarling bitter insults at one another through their drug and/or alcohol haze. Yet, in the end, they seem to know that they have nothing to hold onto but one another, and some kind of strange hope that still hovers over them, and is incarnate in the sound of those bells that are “ringing out for Christmas Day.” As a piece of songwriting (with which Shane MacGowan and Jem Finer tinkered for two years before finalizing) it’s an exquisitely-balanced exercise in the bittersweet, bringing the profane and the transcendent right up against one another and forcing them to shake hands.

Looking for a proper representation of it on YouTube, I find I dislike the official video from 1987, because (to me at least) it’s far too literal and plodding. So I settled on this clip below from the same year from the British TV show “Top of the Pops.” Kirsty MacColl is incomparably cool as she surveys her duet partner, Shane MacGowan, who takes a few moments to realize that the song has started and he ought to be moving his lips and pretending to play the piano. But he gathers himself and they get through the performance in fine fashion. They’re miming but not to the actual original recording; “Top of the Pops” would require performers to re-record the track in their studio and then mime on stage to that recording (go figure). This is given away by the fact that Kirsty for some reason sings “ass” instead of “arse,” when it comes to the line, “Happy Christmas your arse / I pray God it’s our last.” Maybe some BBC apparatchik had pressured her to use the less-colorful version. (Twenty years later the BBC belatedly and briefly decided to censor several words of the record.) As Ira Gershwin would put it, “You say ass, I say arse / You say last, I say lahst / Let’s call the whole thing off.”


I know the song has been covered quite a few times since then by other singers, and Shane has also sung it with other female vocalists since Kirsty MacColl died in the year 2000, but none of those versions work for me in the least possible slightest way. “Fairytale of New York” is a great song, but more than that, it’s a great, great record, and I think its greatness just can’t be reproduced without MacColl’s very special down-to-earth charisma (and, for that matter, without Shane’s very special falling-on-the-ground charisma).