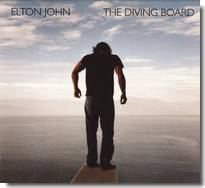 I’ve always had a big soft spot for Elton John. As a kid, I was a real fan, and this was quite a while after his 1970s heyday, during a time when it was highly unfashionable to be an Elton John fan; so I endured much abuse over it, but that only made me dig in my heels all the more. And I will still make a case in hostile company for Elton John when he is doing what he does best. The question is, what does he do best?

The producer of this new album, The Diving Board, is the estimable T-Bone Burnett, and he characterizes it as being “an album of music by a master at the peak of his artistic powers.” (It would naturally be highly dismaying if the album’s producer said it was merely mediocre.) For T-Bone, it’s all inspired by the shows in America that Elton did in 1970, which broke him into the big time: just piano, bass and drums, and some incendiary performing. (Well represented on the album 11/17/70.) This album is based around the same basic trio, although there are occasionally some other colors added such as horns and backing vocals.

It’s my own conviction that Elton is at his best when he succeeds in channeling some kind of deep American rootsy-ness, letting it burst forth through his highly-English soul in his piano-playing and singing, and creating something rather unique, inspirational, charming and joyous. It might be a gospel kind of feeling, it might be R&B, it might be country and western, and Elton might be hamming it up to a ludicrous level, but when all the cylinders are firing and the song itself is good enough, Elton can really hit a height. He can get somewhere. A few examples I’ll just pick without regard to whether they are “greatest hits” or not, from the approximately 25,000 songs he’s recorded: “Honky Cat,” “Where’s the Shoorah?,” “I Don’t Care,” and “My Father’s Gun.” In addition to these kinds of tracks where Elton really “gets the feeling” (as Van Morrison might put it) there are also those occasional standout lush ballads that you just can’t not like (e.g. “Your Song“) and his super-catchy if quite inane masterworks (e.g. “Island Girl” or “Crocodile Rock“). He’s done so much stuff. But the space in between the things he does really well leaves a lot of room for things that don’t ultimately go anywhere (even if they go to the top of the charts). These are records that cannot escape being merely maudlin, or cloying, or bland. 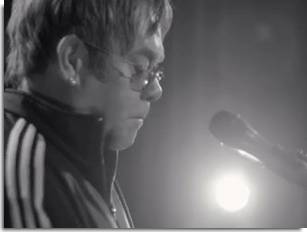 The new album, The Diving Board, from this point of view, is not a terribly unusual Elton John album. It is better—it’s always better—when Elton is playing the piano rather than hiding from it, but the album has perhaps a few tracks that get somewhere, and then a lot of other tracks that are only for the most uncritical fans: a status which sadly no longer belongs to yours truly. “Take This Dirty Water” is one of several tunes where Elton summons his down-home fervor, with the aid of a backing chorus, and is probably the best such on this album. “Home Again” is probably the strongest ballad, if a bit too long. It has the advantage of an easily-comprehensible lyric that connects right away.

It’s (a little bit) funny: In terms of sales, it would surprise me if “Elton John/Bernie Taupin” were not the most successful songwriting duo in the history of Christendom, but they’ve always made a strange pair. Taupin obviously has highly literary inclinations, and sometimes writes stuff that is just downright odd. Elton meanwhile tackles it all with his faux-hillbilly vocal stylings (enunciation not being a big preoccupation of his) and the end result as often as not sounds like gibberish. Take “Oceans Away” on the new album, which as I understand it is supposed to be a touching song about World War II veterans, but whose chorus strikes my ear like this:

Going up, Doctor Moss, lemon shine,
The ones who hold on to the ones
They had to leave behind
Oh the flute, no the fair,
The ones that have to stay,
Beneath the little wooden cross oceans away.

And the song is not unattractive, but—in part because of this incomprehensibility—it doesn’t get where it really needs to go to be a keeper.

In the end, although The Diving Board may not be any holy grail of artistic vindication for Sir Elton Hercules John, on it he certainly proves that at the age of 66 he still has that which he’s always had, namely a plainly miraculous gift for a pop melody and hook, and the ability at least now and then to channel something from someplace higher and spark a beautiful alchemy. Long may he continue to bang those ivories.