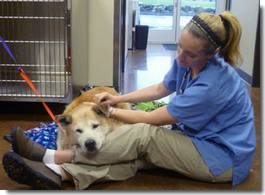 A fifteen year-old Golden Retriever, by the name of Boomer, was found wandering the surface of the recent horrific mudslide in Washington state which took so many lives so suddenly. The rescue workers who found him were elated, believing he was a victim of the event and therefore a rare and blessed survivor. The veterinarian (Dr. Krystal Grant) who examined him found him to be dehydrated and with injuries to his hip and his leg. Fifteen is a grand old age for any Golden Retriever. But he had not been buried in the landslide and somehow found his way out. Instead, it was ultimately discovered, he had walked three miles from the home of his current owner to the site where his former owner (currently on the “missing” list) once lived.

Dogs, while only animals and not perfect, sometimes provide the medium for mysterious miracles. They have this indelible and inexplicable devotion to human beings. Dogs can rescue lost children, or stay with them through cold nights, awake families in fires, alert others when their owners are injured, defend homes against murderous invaders, and awaken a love for life in countless sick and disabled people.

In this case, there was no miracle. Boomer’s former owner was not found beneath his feet. The event was not a miracle, but only a parable, for those open to seeing it that way. The meaning of the parable, I’d humbly suggest, is just this: No one is forgotten.