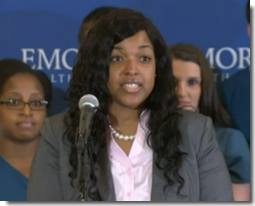 These kinds of things tend to be quickly swept away in the major media outlets, so I’m just pausing for a moment to highlight them.

Today Dallas Nurse Amber Vinson was discharged from Emory University Hospital, and declared free of Ebola, which she caught while caring for the patient Thomas Eric Duncan. Her statement on release began like this:

I’m so grateful to be well. And first and foremost, I want to thank God. I sincerely believe that with God all things are possible.

While the skill and dedication of the doctors, nurses and others who have taken care of me have obviously led to my recovery, it has been God’s love that has truly carried my family and me through this difficult time and has played such an important role and given me hope and the strength to fight.

After thanking many specific people, and drawing attention to the terrible toll that this disease is taking on so many people in West Africa, and before asking for privacy, she ended her statement with this:

Finally, my family and I would like to thank many people whose prayers have helped sustain us.

This follows the discharge on October 24th of Nurse Nina Pham, who likewise caught the Ebola virus while caring for Mr. Duncan. On being declared free of Ebola and released, her statement began this way:

I feel fortunate and blessed to be standing here today. I would first and foremost like to thank God, my family and friends.

Throughout this ordeal, I have put my trust in God and my medical team. I am on my way back to recovery, even as I reflect on how many others have not been so fortunate.

After thanking again many specific people, she also said:

I believe in the power of prayer, because I know so many people all over the world have been praying for me. I do not know how I can ever thank you – everyone – enough for their prayers and their expressions of concern, hope and love.

I join you in prayer now for the recovery of others, including my colleague and friend, Amber Vinson and Dr. Craig Spencer.

Back in August, the first Ebola patient to arrive in the United States was Dr. Kent Brantly. When he was declared free of the virus, and released from Emory Hospital, he began his statement like this:

Today is a miraculous day. I am thrilled to be alive, to be well and to be reunited with my family.

Again, after thanking many people who had helped him, he finished by saying:

Above all, I am forever thankful to God for sparing my life and am glad for any attention my sickness has attracted to the plight of West Africa in the midst of this epidemic. Please continue to pray for Liberia and the people of West Africa, and encourage those in positions of leadership and influence to do everything possible to bring this Ebola outbreak to an end.

For first and foremost thanking God for sparing his life, Dr. Brantly was widely disparaged, as in the article at this link for “idiocy and hypocrisy,” and for being “plain irresponsible.” How could a doctor, after all, a man of science, and one very knowledgeable about the treatment of Ebola in particular, credit “a man up in the sky” for saving him when he should well know it was as a result of the specific medical care and treatment he received?

And now we have Nina Pham and Amber Vinson—who as educated and certified nurses are surely “women of science”—doing the very same thing. (And also having the bloody nerve to offer “prayers” for Dr. Craig Spencer!)

A common theme in criticisms of Dr. Brantly’s thanks to God (as well as in criticisms of this kind of thing in general) is that by thanking God for the mercy shown to him, Brantly was somehow saying that therefore God disapproves of those who are dying of Ebola.

I’d humbly suggest that in this there is something of a failure to understand the nature of a gift, and the nature of thanks. When someone gives you a very great gift—something you very much need, and something that will greatly help you—it is surely customary and appropriate to say “thank you,” and surely by doing this you are not in any way condemning all those people who did not receive the same gift from that person. If you believe in God, you kind of have to believe that He deserves all the thanks, all the time. Unexpected and/or undeserved gifts are what some people refer to as the grace of God.

And then you ought not to want to look that gift in the mouth but instead to use it very well. Dr. Kent Brantly, for his part, seems hardly to have paused in repeatedly donating his blood and plasma to other victims of Ebola. And at the same time people are wondering, in recent days, why all but one of those treated in the U.S. have survived Ebola, when the virus has been so much more lethal overseas.

Saying “thank you” is always good manners. And it is much more than that, too.