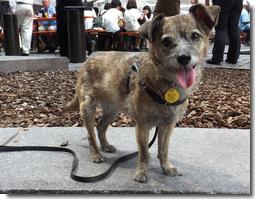 In case anyone missed the really big news of the year so far, a study was published in the journal Frontiers in Zoology that seems to demonstrate a sensitivity in dogs to the Earth’s magnetic field. Specifically, the study monitored 70 dogs (of various breeds) for two years and the researchers found: “Dogs preferred to excrete with the body being aligned along the north-south axis under calm [Magnetic Field] conditions.”

So, based on this study, when dogs, er, conduct their business, they prefer to face either north or south (or at least have their backs aligned along that axis). But are we talking about number 1 or number 2? Both, it seems, and for both male and female dogs, who were observed in these behaviors while they were off the leash and with various other safeguards to try and ensure that no undue influence was placed upon them by the observers.

We found no differences in alignment of females and males during defecation and of females during urination, which might be related to a similar posture the animals are adopting during defecation (in all dogs) and urination (in females). Urinating males have a slightly different preference to orient their body axis than urinating females (cf. Figure 3); this could be caused by leg lifting during urination in males. Indications of different directional tendencies depending on which leg (left or right) is lifted are currently under study. All recordings were made outside on open fields, and routes of walks were routinely changed to exclude or limit pseudoreplications which would arise when dogs are defecating or urinating at just a few places within their kennel or house yard.

So, as you can see, they put quite a lot of effort into this. The study was in part inspired by evidence of similar magnetic sensitivity in other mammals. The researchers’ fundamental conclusions are that …

(a) magnetic sensitivity was proved in dogs, (b) a measurable, predictable behavioral reaction upon natural MF fluctuations could be unambiguously proven in a mammal, and (c) high sensitivity to small changes in polarity, rather than in intensity, of MF was identified as biologically meaningful. 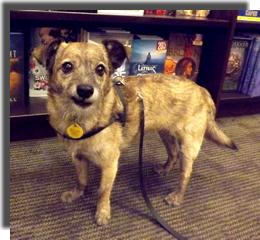 It is certainly a curious business (pun hardly intended). As the owner of a little dog in New York City, I might have expected to have seen evidence of something like this. The avenues in New York go (roughly) north/south, while the side streets are (roughly) east/west. So, if my dog conducts her business along the curb, which she usually does, it might make sense if she did it more on avenues than on streets. This isn’t so. However, she does not count as a great test case, because she’s on a leash, and furthermore I’ve never paid that close attention to her actual precise body alignment at the given moments. And anyhow, the north/south/east/west points are, as mentioned, not truly precise.

Those who conducted the study also took great pains to identify when the Earth’s magnetic field was steady, instead of fluctuating. Apparently it is only steady about 20% of any given day. It is only during these times that the dogs’ alignment was obedient to the north/south axis.

I think that most dog owners would at least have noticed that their dogs have curious preferences about such things. Finding the right place and position seems to be of some mysterious significance to canines. So this magnetic thing apparently may be something do with it. I guess that interested dog owners will be paying closer attention to their pooches at these moments, leading the dogs to wonder what strange new behavior it is that the homo sapiens are exhibiting. 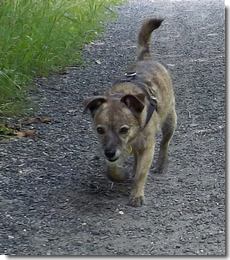 But all of this obliges the question as to what could possibly be the purpose of canine excretory north/south alignment. The researchers do not have a conclusion on that, but they have some speculations. Noting that it has been theorized that other animals use magnetic polar alignment to find their way around, they suggest the dogs may be taking these opportunities to recalibrate their internal “maps” in relation to the current environment and the landmarks within their view.

Aligning the map and the view towards North (or South) facilitates reading the map. Furthermore, calibration only makes sense when the reference is stable and reliable. We might think of this the same way as a human is stopping during a hike to read a map. When the map is blurred or the reference (perceived magnetic direction) is dispersed or moving due to magnetic disturbances, however, calibration is impossible. In the case of the dogs it thus would totally make sense to not pay attention to magnetic body alignment any more under conditions of a shifting magnetic field.

Well, could be. It initally had occurred to yours truly that it might have something to do with the wind; i.e. if the prevailing wind is in an east to west type direction, then aligning themselves this way would help avoid them getting wind of themselves, if you know what I mean. But the very particular sensitivity to the magnetic field fluctuations which the researchers found seems to rule this out. And if it were about wind, then why not just be sensitive to the wind instead?

It is fascinating it its way, and a reminder that for all we think we know, there is still so much more to be known. About every kind of business. 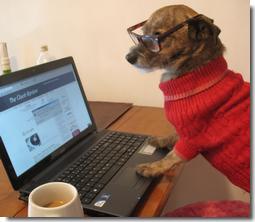 On a somewhat tangential subject: One behavior we’ve definitely noticed in our dog while walking on the city streets is her very distinct inclination for peeing in such a way as not to end up standing in a pool of her own making. The really interesting aspect of it is that she solves this problem in a wide variety of ways, displaying a good understanding of fundamental physics in the process. The first thing necessary to note is the wrong way to do it, which would be just squatting on the plain ordinary flat sidewalk and letting loose. The pool of liquid would simply spread on that surface and end up coming into contact with her back feet. So she doesn’t do this. One way she addresses the issue is by choosing absorbent surfaces instead. Leaves are great for this, so fall and winter see a great deal of action on piles of leaves. Newspapers or bits of cardboard lying in the gutter are also useful. Another option is a surface that has crevices or holes which prevent pooling. And typical New York City sidewalk grates are ideal. Having small paws that can fall through the openings, she doesn’t like to walk on such metal grates ordinarily, but when the need arises she will gingerly position herself on top of one and send her delivery directly into the city sewer system.

In other instances she will deftly use an incline in the curb or the sidewalk to carry the liquid streaming away from her. On those very rare occasions when she miscalculates and gets her feet wet, I solemnly swear that she makes a very definite face—a decidedly sour look.

In general, she hates getting wet, whether it be from rain or anything else, so it makes sense that she would try to avoid it, all other considerations of hygiene aside. I wonder if female dogs who are less bothered by getting wet (e.g. who like swimming) show a disregard for this same issue. Truthfully, I’ve never talked to other dog owners to find out if their dogs act the same way. I am a little afraid of what they might think of me. Putting it in writing on the internet might seem even riskier, but, as we know, a computer screen doesn’t judge.

It all goes to a broader point about dogs. They are smart about those things that matter to them, when it matters. If you asked our dog, Billie, which is the more porous surface—concrete or leaves—she would likely give you a blank look and go back to licking herself. You might easily conclude that she had no idea. Yet, given a good reason of her own to make the distinction, she does it without any training whatsoever.

It has made me wonder whether, if she had good reason to go to the moon—for instance sure knowledge of an infinite supply of free dog biscuits on the lunar surface—she might figure out a way of getting there.

Creation and its creatures: an inexhaustible source of wonder.