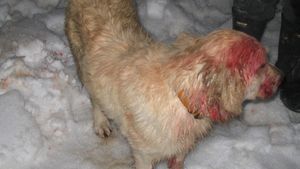 In Canada (British Columbia), in a town called Boston Bar, a Golden Retriever got in between a cougar and an eleven-year-old boy, quite possibly saving the boy’s life. From CTV:

According to RCMP, the boy went to retrieve some firewood at his family’s home in Boston Bar, about 200 kilometres northeast of Vancouver.

A cougar began to charge across the yard at the boy.

The dog stepped in and engaged the cougar, which was much larger than the dog.

A call was made to police. An RCMP officer was nearby and was on scene within a minute.

The officer found the cougar under the back porch and heard the dog cry out as the cougar chewed on the dog’s neck.

The officer fired two rounds into the cougar’s rear end, but the cougar continued its attack.

The officer closed in to within five feet and shot the cougar again, killing it. 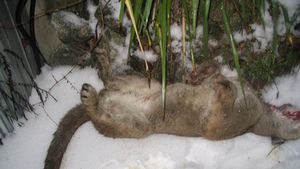 The dog is said to have received only minor injuries. (You know, the kind you get when you roll around with a cougar under the porch and it chews on your neck a little bit.) Pictures are courtesy of the Royal Canadian Mounted Police.

Angel is a very good dog, obviously. It’s a very lucky thing that the Mountie was so nearby and able to respond, or the Golden Retriever would surely have given its life. Instead, Angel will hopefully be treated to steaks in place of kibble for some time to come.

Personally, if I lived in cougar country, I’d want to have a rifle handy for situations like this. Mounties may always get their man, but they can’t always be a minute away.

One thought on “Dog named “Angel” saves boy from cougar”