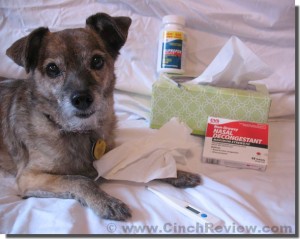 The canine influenza A H3N2 virus kicked off its run in Chicago, that toddlin’ town, several months back, and has been spreading across the Midwest. Today a case has been reported in Houston, Texas, so it seems that this virus has gone well and truly viral.

The CDC says, among other things, that:

The signs of this illness in dogs are cough, runny nose, and fever, but not all dogs will show signs of illness. The severity of illness associated with canine flu in dogs can range from no signs to severe illness resulting in pneumonia and sometimes death. The percentage of dogs infected with this disease that die is very small. Some dogs have asymptomatic infections (no signs of illness), while some have severe infections. Severe illness is characterized by the onset of pneumonia. This is a relatively new cause of disease in dogs and nearly all dogs are susceptible to infection. […] Canine flu can spread to other dogs by direct contact with aerosolized respiratory secretions (coughing and sneezing) from infected dogs, by uninfected dogs coming into contact with contaminated objects, and by moving contaminated objects or materials between infected and uninfected dogs.

So it’s not exactly the black death for dogs, but it’s significant, it’s very contagious, and as with the kind of flu that commonly affects humans it can in a minority of cases lead to very serious illness and death. (And this is to say nothing of huge veterinary bills.) It would seem to be a bigger threat in urban areas than rural ones, obviously enough, since contact with infected dogs or surfaces that have recently come in contact with infected dogs would be the mode of transmission.

Just in case there wasn’t enough to worry about. Be careful out there.