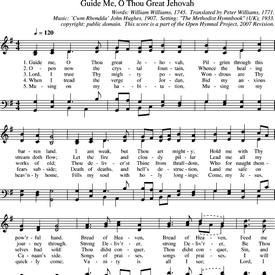 It is a hymn which derives its imagery and narrative directly from the story of the Israelites, led from slavery in Egypt and guided to the Promised Land, as in the Bible from Exodus through Joshua. Key touchstones from that story are invoked to convey the prayer of just one poor sinner, wishing for God’s guidance, trusting in His grace, and offering humble praise.

Through the gift of YouTube, one can find an almost-incalculable number of renditions of this song, with its various titles, in various guises. You want it at a rugby match, complete with Tom Jones and beer-sodden fans? You got it. You want it from a chapel in Wales? You got it. You want it at the wedding of William and Kate? You got it. You want a radically different version at an African-American church in the U.S.A., led by Pastor Calvin Johnson, with nary a Welshman in sight? Here it is. How about a Welsh Male Voice Choir from Dublin, Ireland—singing in Boston, Massachusetts? It’s yours. In the language of the great Navajo people: click this link. Cherokee: no problem. Famous soprano Charlotte Church singing the song in Jerusalem: right here. This is scratching the surface of what’s available.

I will embed just two versions here, by the power vested in me. One is as solid and laudable a “conventional” rendition as one could wish for, provided by the glorious Froncysyllte Male Voice Choir.

What touches this listener most deeply, however, is in the end an antidote to all of the grand renditions, as genuinely grand as they are. It is an unaffected performance, by a musician named Cerys Matthews, from her rather incandescent album of Welsh standards, titled Tir. (Highly recommended.) Among the things about it that I love is that it reminds the listener that this is the prayer in the end of just one poor pilgrim, albeit joined on a journey with so many others. No need to “update” the lyric; she sings it as it was, and it is as immediate and contemporary as ever.

(Slideshow is of various Welsh scenes as uploaded by the anonymous fan.)