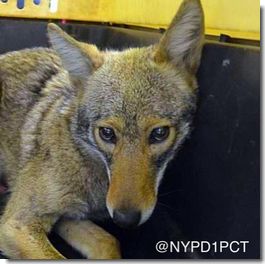 New York, New York, it’s a wonderful town / The Bronx is up and the Battery’s down / The people ride in a hole in the ground … and the coyotes have now traversed this town all the way down to the Battery, in the form of Manhattan’s modern and posh Battery Park City, nestled in the southwestern tip of the island. Today a female coyote was cornered after a long pursuit by the NYPD at a sidewalk café in that neighborhood, shot with a tranquilizer dart and then delivered to the ASPCA.

We’ve taken our dog for an excursion down to that part of the city on a few occasions, and encountered signs there saying that dogs are not allowed on the grass (try explaining to your dog that he/she has to walk only on the pavement). One wonders whether the coyotes might be breaking that rule. But then they are not dogs, so I guess technically it doesn’t apply to them. If it comes to it, they’ll probably be able easily enough to find a strident ACLU type lawyer in New York to press the point for them in court. And if the coyotes get any more common in the city, it won’t be long before they are unionized, form a political lobby, and have an annual parade on Fifth Avenue. 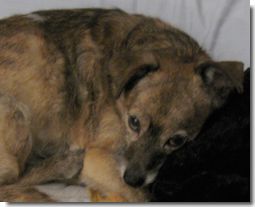 Coyotes invading New York City may be the most trivial of issues in a world blowing apart at the seams, but we’ve been following it, so we’ll continue to as required. It may be a harbinger of the end times, or merely a pleasant distraction from the pressing grim realities. One thing is sure: that photo (at top) taken by the NYPD of today’s coyote captures her seeming to look quite cute, quite shy and quite harmless. In fact, she looks an awful lot like our dog (at right), albeit that our dog is only about 18 inches long and 14 lbs in weight. Still, a day doesn’t pass without someone asking, “What kind of dog is that?” and I’m sick and tired of my own stock answers, so I think for a while I’ll be saying, “No kind of dog. She’s a miniature coyote. From Peru.”

Next year everybody will have one.