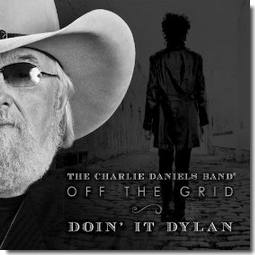 Charlie Daniels and Bob Dylan have more in common than some might think. Don’t take it from me, though, take it from Bob Dylan in these extracts from his memoir Chronicles, where he’s talking about how much he enjoyed having Charlie Daniels around during recording sessions for Nashville Skyline, New Morning and Self Portrait.

I felt I had a lot in common with Charlie. The kind of phrases he’d use, his sense of humor, his relationship to work, his tolerance for certain things. Felt like we had dreamed the same dream with all the same distant places. A lot of his recollections seemed to coincide with mine. Charlie would fiddle with stuff and make sense of it. … When Charlie was around, something good would usually come out of the sessions. … Years earlier Charlie had a band in his hometown called The Jaguars who had made a few surf rockabilly records, and although I hadn’t made any records in my hometown, I had a band too, about the same time. I felt our early histories were somewhat similar. Charlie eventually struck it big. After hearing the Allman Brothers and the side-winding Lynyrd Skynyrd, he’d find his groove and prove himself with his own brand of dynamics, coming up with a new form of hillbilly boogie that was pure genius. Atomic fueled—with surrealistic double fiddle playing and great tunes like “Devil Went Down to Georgia” …

Charlie Daniels also wrote about Bob Dylan in one of his books (so that makes them both authors too): Ain’t No Rag: Family, Freedom & the Flag. He describes being interviewed by one of Dylan’s many biographers, Howard Sounes, and then being very disappointed that the book did not turn out to be the upbeat work he had expected.

[Sounes] painted a picture of a vindictive, hard-nosed individual who took advantage of situations and was unfaithful to friends. He seemed to take delight in belittling Dylan’s numerous and incredible accomplishments and emphasizing his problems and failures. […]

He painted a totally different picture from the one I have always had of Bob Dylan after spending admittedly a limited amount of time with him. But I just can’t believe that I’m that bad a judge of character.

The Bob Dylan I remember was fun to work with and fun to be around. With a sense of humor and friendly and courteous manner toward the people with whom he was working, he had a way of making you feel free to do your own thing when you were in the studio with him. […]

I remember him as the family man who brought his wife, Sara, and his young son, Jesse, to Nashville when he recorded Nashville Skyline. I remember him as the giant who gave a bottom-of-the-totem-pole guitar player a chance to be a part of musical history. There’s only one Bob Dylan, and I’m thankful to have had the opportunity to walk in his shadow for a season.

Well, for Bob Dylan and Charlie Daniels, I think that speaking well of each other speaks well of them both.

On to the new album, then: Off the Grid: Doin’ it Dylan. It’s the first time Daniels has recorded an album of Dylan covers, or as far as I know, any album dedicated to the songs of another writer. The “off the grid” part of the title refers to the fact that it is all acoustic; yet, do not be fooled into thinking that this is a quiet album. The Charlie Daniels Band are in high gear on this recording, and the best word for their overall approach to the material is rollicking. Charlie sings with gusto but would probably freely acknowledge that he’s neither Frank Sinatra nor George Jones, so if you’re looking for heart-rending and emotionally-nuanced reinterpretations of Bob Dylan’s songs you’d best look elsewhere; on the other hand if you want to hear a band of superb musicians going to town on the grooves and melodies of the songs, then this should fit the bill very well.

Standout tracks include “Quinn the Eskimo (The Mighty Quinn)” which motors along irresistibly to Charlie’s fiddle and would enliven any party (and likely create one where none existed). “I’ll Be Your Baby Tonight” is also played faster than we’re used to hearing it, but comes up trumps like the true standard of country and popular music that it is. “The Times They Are A-Changin'” benefits from the Charlie Daniels Band’s reading in a highly tuneful and high-powered arrangement. “Tangled up in Blue” is one of those Dylan songs which are undeniably great and yet don’t ever seem to make sense, in my opinion, being sung by someone else, and I can’t say this version makes me change my mind, but Charlie Daniels and the band certainly make the most of the driving groove. And speaking of driving, this is an album that would make for highway music par excellence.

“Gotta Serve Somebody” gets a great workout, and it has indeed proven to be a very durable song. It is also easily the latest Dylan song, chronologically, that Daniels tackles here on an album largely devoted to Dylan’s 1960s output, which may either be a missed opportunity or a suggestion for a follow-up record. Bob has so much great material in the last couple of decades that cries out for mining. Think: “When the Deal Goes Down,” “This Dream of You,” “Summer Days,” “Someday Baby,” … but, don’t get me started.

“Country Pie” is a tune that Charlie Daniels played on in its original form on Nashville Skyline, and it fits him like a glove here. I do love the way he sings “Raspberry, strawberry, lemon and lime / What do I care?”, that last line hurled off his lips in an exquisitely careless way. And the infectious joy in the playing of the whole band on this number sums up everything that’s best about the album.

Off the Grid: Doin’ it Dylan is available via iTunes, and via Amazon.com, and via The Charlie Daniels Band website.