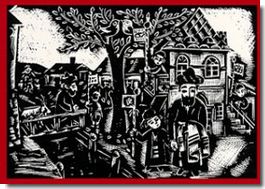 A happy and blessed Passover to all of those observing it from us at the CINCH HQ.

I’m a Christian, but I found fascinating a recent article in the Boston Globe on the exponential growth of the Jewish Chabad-Lubavitch organization. In the Boston area Chabad has grown from 7 synagogues to 26 over the past 20 years, but their growth has been nationwide and indeed worldwide. After the 1994 death of Chabad’s most recent leader, the by-all-accounts-inspiring Rabbi Menachem Schneerson, many suspected Chabad would fade away, but instead they have exploded, growing “faster in the last 20 years than in the previous century.” Where are their congregants coming from?

The Globe quotes Rabbi Arthur Green, a professor of Jewish Philosophy and Religion at Hebrew College in Newton, who says:

[The Chabad have] tapped into a real longing of people for something more serious and more spiritually alive. Many synagogue services are rather dull, and something about Chabad captures a sort of new energy. They’re very old fashioned, and in some ways they are the old European product, but they have a kind of spiritual passion about them that people long for and don’t find in their liberal synagogues.

They also break the typical mold for how people can participate in a synagogue. There are no membership dues, and donations are optional. Rabbis’ assignments in their particular communities last for their lifetime. They are not paid a salary by the organization, but live on the money that is voluntarily donated, generally “in modest homes near their synagogues.”

In theological terms, the Chabad is an Hasidic sect, drawing from a tradition that thrived in Old Europe until the mass murders of the twentieth century. But while the rabbis are faithful to their orthodoxy, and teach from it, they don’t demand that those who show up to learn jump in with both feet. Rabbi Alti Bukiet of Lexington Massachusetts puts it this way:

It’s not a question of them becoming more religious or becoming a participant in an Orthodox synagogue. I’m here to help people be one with God, whatever that means, in everybody’s life. I am not here to place a label or a definition on a person’s relationship with God. That’s not my goal.

The Chabad have embraced technology and it seems that their growth has somewhat mirrored the growth of the internet during the same period. (Indeed, if you look up any particular Jewish holiday type of question on Google, you’re likely to get Chabad’s answer front and center.) And in the flesh their rabbis offer information and guidance on the fundamental tenets and practices of Judaism to all who seek it, and are evidently inspiring people in the twenty-first century with nothing more than some very old ideas which appear—against the odds—to still have life left in them.

In a time when more and more people in the West are floating in a nether-world of spiritual confusion, self-doubt (with its flip side of narcissism) and faithlessness, the Chabad would seem to be providing a dramatic example of the opposite, along with lessons in how to make traditional religious truths relevant and alive to people in contemporary society.

That sounds like good news. Lord knows we need it.