Hook, Line and Singer: A Singalong Book is a 288 page, hardcover tome being released imminently via Penguin. It’s a songbook which has been put together by Welsh singer and raconteur Cerys Matthews, of whom we’ve become big fans lately at the Cinch HQ. This isn’t a review, as I don’t have the book [*see ADDENDUM below], but merely an honorable mention for something that looks charming. By all accounts, the book presents a wide collection of beloved songs in an easily playable and singable format, with the goal of encouraging folk—especially families with young children—to make their own music, turning off for a while the auto-tuned plastic product that assaults us all the time on the airwaves. It also includes background and commentary on the songs, alternate translations and the like.

But you can listen below via YouTube to Cerys Matthews talk about Hook, Line and Singer, and also about her literary hero (Dylan Thomas), her musical hero (Bob Dylan) and music in general. Also you can hear a snippet of one of the songs in the book, namely the gospel classic “Down by the Riverside.”

*Addendum July 10th: Since writing the above I have bought a copy and shared it with two nieces on a recent family visit. It was a big hit, and looks certain to be used a great deal in the future. What makes it an especially wonderful songbook is the breadth of genres covered, with movie songs such as from “The Wizard of Oz,” folk songs, gospel songs, Americana, melancholy songs and funny songs. From “Edelweiss” to “Home On The Range” to “Whistle While You Work” and “On Top of Old Smokey” … it’s just a really well-chosen collection that has something for any mood, and some quite unusual things too. And then to have the little essays and stories accompanying each song is superb, because it puts them in some kind of context, instead of just tossing them out there helplessly. I was not in the least disappointed. It is a beautifully put-together book and a wonderful gift. 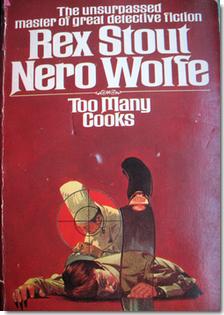 Rex Stout’s series of Nero Wolfe books are so deeply beloved, I think, not because of brain-teasing mysteries—though the crime and mystery are the pegs which hold the rest—but rather the pleasure of being immersed in Nero Wolfe’s beautifully constructed household and routine, and enjoying the interplay and competition between him and his assistant Archie Goodwin—the narrator—as well as the extended family of regulars, including Fritz the chef, Cramer the police inspector, and so on. Every day proceeds with its glorious routine of a superb breakfast, a trip to the plant rooms, a ride down the elevator to the office to read the mail and possibly conduct business, an invariably wonderful lunch, another trip to the plant rooms, another interval in the office for business, an always-remarkable dinner, and then one final possibility for interviewing suspects/witnesses/clients in the office before bed. Wolfe never leaves his house for business (at least that is his rule), and rarely for pleasure, as he has arranged all of his pleasures so close at hand: his food, his orchids, his books and his beer. END_OF_DOCUMENT_TOKEN_TO_BE_REPLACED

I’ve recently read David Evanier’s All the Things You Are: The Life of Tony Bennett

, and it seems to me that it will stand as the essential written reference point for anyone interested in this great American singer’s life and music. Of-course, being about the only proper biography written of Bennett (excluding his 1998 autobio The Good Life

in collaboration with music-writer Will Friedwald) it lacks obvious competition. Nevertheless, this book is no knockoff, but an assiduously researched work by a writer completely engaged with his subject matter. It is far from an official biography and proceeds with that freedom; the aggressively private Bennett himself did not grant an interview and neither did some figures whom one could rate as key intimates of the singer, but out of a number of in-depth conversations with those individuals who did grant interviews, and a thorough marshaling of what is already public record, David Evanier has constructed an estimably credible and robust account of Bennett’s life and career.

When it comes to books on major figures in the entertainment world, you often have a dichotomy between those which focus on the famous individual’s personal life versus those which look at their art and life’s work with an appreciative eye. Evanier combines both approaches here, and, in addition to being the best way, objectively-speaking, of approaching the task, in Bennett’s case it also must be seen as the absolutely obligatory way. There could be no way of telling Tony Bennett’s life story in a meaningful way without getting to grips with his passionate devotion to his chosen musical form, and the full range of struggles and successes he has experienced in that realm. END_OF_DOCUMENT_TOKEN_TO_BE_REPLACED 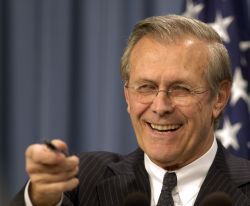 I expect it will be characterized in the near term by critics based largely on political bias: Rumsfeld’s many enemies, both on the left and right, will give it short shrift. His friends — a subset of the political right in America — will laud it. END_OF_DOCUMENT_TOKEN_TO_BE_REPLACED

The Hilliker Curse: My Pursuit of Women by James Ellroy. 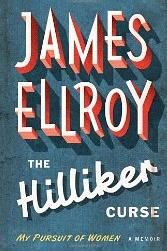 I like James Ellroy. My favorite book of his — and I think his greatest — is American Tabloid,

which is a take like no other on American history from 1958 to the end of 1963. Unlike the JFK conspiracy tracts and movies which beg you to accept their veracity but can’t escape their basis in puerile phantasm, American Tabloid — while not pretending to be anything other than complete fiction — can leave a reader wondering how in hell it could not be the truth. It’s so real, so perfect, so true to human nature. It is dirtier than any conspiracy theory, and messier and far more believable than any politicized take could be. As a literary achievement, it’s hard to argue that it is not Ellroy’s finest hour; all the darkness, madness and obsession is kept just enough in rein with a narrative that burns high-octane all the way yet somehow keeps driving within the lines of a crazy whiplash highway.

This new book is a memoir, with the pointed subtitle: “My Pursuit of Women.” The “Hilliker” of the curse named in the main title is Jean Hilliker, which is the maiden name of Ellroy’s mother. She was murdered in 1958, when James Ellroy was ten years old. Months previously END_OF_DOCUMENT_TOKEN_TO_BE_REPLACED 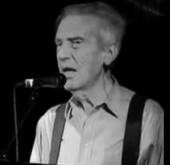 Nonetheless, Samuel Menashe’s work has a kind of END_OF_DOCUMENT_TOKEN_TO_BE_REPLACED