In Chicago, a wire-haired fox terrier named Maggie was home alone—and must have been pretty bored—when she managed to make her way out of her apartment’s fourth-floor window and onto a ledge that is reportedly only five inches wide. It’s not clear how long she was out there, but neighbors spotted her in the terrifying predicament and called the fire department.

As you can see in the amateur video clip embedded below (the key action begins at about the one-minute marker) a firefighter just pokes his head out the window and presumably calls the dog to come. However, the problem is that she is facing in the opposite direction. There seems to be a moment when she starts to try to turn her body around, but then realizes she doesn’t have the room to do so. She briefly walks forward towards the corner edge … but then, in a glorious Eureka moment, starts to gently walk backwards towards the man in the window. As soon as she is within reach he lifts her inside. It’s only a few seconds, but it’s pure heart-stopping drama. END_OF_DOCUMENT_TOKEN_TO_BE_REPLACED

From the U.S. Food and Drug Adminstration (FDA):

In the last 12 months, FDA has seen an increase in the number of complaints it received of dog illnesses associated with consumption of chicken jerky products imported from China. These complaints have been reported to FDA by dog owners and veterinarians.

There are reports that at least 70 dogs have been sickened by such treats, with some dying. Further: END_OF_DOCUMENT_TOKEN_TO_BE_REPLACED

Fourteen dogs and one cat found themselves shipped from Afghanistan, via Dubai, to the United States, to be reunited with the U.S. soldiers who had benefited from their friendship while on duty in Afghanistan. It happened at New York City’s JFK airport today, and it is thanks to the charity Nowzad and to American Airlines. Some video below. END_OF_DOCUMENT_TOKEN_TO_BE_REPLACED 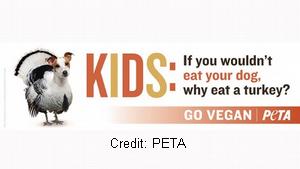 In an ad released by the animal rights organization “People for the Ethical Treatment of Animals” (aka PETA) a dog with a turkey’s body (or a turkey with a dog’s head) is pictured beside the question: “Kids: If you wouldn’t eat your dog, why eat a turkey? GO VEGAN.” PETA plans to post the ad on billboards near public schools in cities around the country, according to ABC News.

No, PETA, I would not eat my dog for Thanksgiving. And neither, I hope and trust, would my dog eat me for Thanksgiving, or any other holiday observance. But my dog would assuredly and happily eat a turkey, or part of one. And I plan on recognizing my dog’s inherent good sense and good taste by doing the same thing myself.

Titan, a Pit Bull dog, is credited with saving a woman’s life in Georgia, alerting her husband before he left the house when she had had a brain aneurysm and had fallen down, fracturing her skull. From CBS Atlanta:

“He ran down the steps and would not let me go out the front door,” [John] Benton said. “He was barking and running around in circles, he’d run up a few flights of steps and run back down just to keep me from going to let me know something was wrong. And that’s when I followed him up the stairs to see what he was trying to tell me.”

END_OF_DOCUMENT_TOKEN_TO_BE_REPLACED

It’s one of those feel-good stories of the day, I suppose. In Camaguey, Cuba, reports the Associated Press, Yeti the farm dog has not only fed her own litter of pups but has been “adopted” by fourteen piglets who now run to her to get sustenance in addition to what they are getting from their natural mothers.

Apparently this just happened spontaneously and the dog has gone along with it, as have the farm owners who are now reaping whatever meager rewards they may get from the publicity surrounding the phenomenon. END_OF_DOCUMENT_TOKEN_TO_BE_REPLACED

Michael Yon, the well-known independently-operating war reporter, has just published a piece on his website about the military dogs of the war in Afghanistan (along with a look at some aggressive poultry aka “veloci-chickens” which inhabit the same country).

We usually only hear about the military dogs when something out of the ordinary or particularly poignant occurs, but Yon provides a perspective on their general lot in life, which apparently is a lot better than you might think: END_OF_DOCUMENT_TOKEN_TO_BE_REPLACED

The Los Angeles County Sheriff’s office has released surveillance video apparently taken during the robbery of a smoke shop in Altadena, California. The 21 second clip (below) shows two masked intruders, one carrying a bag and the other a rifle, running into the smoke shop and loudly demanding “Give me your money.” While the bag is on the counter a Chihuahua runs out barking madly, making one robber back up quickly to the exit in obvious fright, pulling the one with the rifle in front of him as if for protection. The rifle is momentarily pointed at the unfazed pooch. The bag is grabbed again—presumably with some loot in it—and the robbers escape, but the flustered criminals are pursued valiantly down the street by the clearly apoplectic Chihuahua. END_OF_DOCUMENT_TOKEN_TO_BE_REPLACED

Well, so goes the story from UPI, although it doesn’t really sell me on the full 150 feet part. Of-course, anything is possible.

A woman named Gwen Hall was walking her 5 year-old Bernese mountain dog, called Sasha, in Washington State’s Olympic Mountains. The dog “took off after a mountain goat” and in the process at some point ran right off a cliff. The owner failed to find the dog, but later six volunteers from an organization called Olympic Mountain Rescue succeeded in both finding and rescuing her. Sasha is reported only to have an injured paw and that broken tooth. END_OF_DOCUMENT_TOKEN_TO_BE_REPLACED

In the Albany Township area of Pennsylvania, a deputy sheriff named Kyle Pagerly and his trained police dog, a three year-old German Shepherd named Jynx, were part of a task force of law enforcement officers searching for a fugitive named Matthew Connor. Connor had donned camouflage and taken up position in the woods, in what has been described as a sniper’s nest, bearing a semiautomatic rifle. Jynx detected him and gave the alert to his handler. A shootout ensued, in which both the deputy sheriff and the fugitive suffered fatal gunshot wounds. It is reported that after Deputy Sheriff Pagerly was shot, his dog Jynx attempted to pull him to safety by the leg of his pants. END_OF_DOCUMENT_TOKEN_TO_BE_REPLACED

At a prison in Monroe, Washington, inmates are participating in a program wherein they train dogs who will become service animals.

A prisoner named Darin Dodge is quoted at KOMOnews.com saying, “After being in prison 21 years, you get to wake up in the morning and the first thing you got is a four-legged furry dog breathing down your neck wanting some attention … Knowing that these dogs are going to help people that are handicapped… that probably have a lot more bad days than even the worst circumstance a guy can have in prison.” END_OF_DOCUMENT_TOKEN_TO_BE_REPLACED 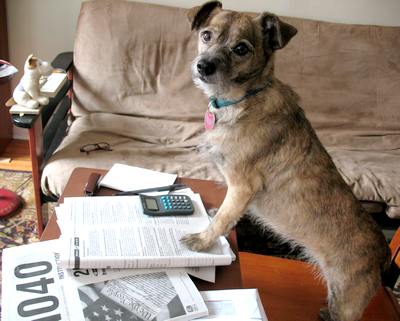 Tax deadline day can be stressful. It’s April 18th this year, so there’s a few more days. Our terrier Billie strongly advocates getting on top of the paper work early. END_OF_DOCUMENT_TOKEN_TO_BE_REPLACED

In Duncan, South Carolina, a high drama of life and death played out last Sunday evening. A woman named Chanda Davis was in her backyard, preparing to do some grilling, accompanied by her 2-year old daughter and 12 year-old son. According to her report, two Pit Bull dogs suddenly appeared, approaching her daughter from behind. She told WYFF: “How I got to her so fast is beyond me. I picked her up with one arm and just threw her on top of my car.” Then the Pit Bulls turned on her. END_OF_DOCUMENT_TOKEN_TO_BE_REPLACED

As reported in STLToday.com and elsewhere, a Belgian Malinois bomb-sniffing dog, named Ddaphne (the spelling is a reference to a training program she came out of) has come home to a family in Festus, Missouri. Army Staff Sgt. James R. Ide was a dog handler and trainer, who was killed in action last August 29th in Afghanistan at the age of 32. He had worked with Ddaphne since 2006, and she was with him when he was killed. His widow, Mandy, asked if she would be able to adopt the dog when it had completed its mission, and U.S. Army eventually acceded to that request. Ddaphne reportedly needed medication to manage post-traumatic anxiety after the death of Staff Sgt. Ide. END_OF_DOCUMENT_TOKEN_TO_BE_REPLACED

Here’s the video, from the Associated Press, of the heartwarming meeting of the owner and the dog (named Ban) who was rescued a few days ago from the floating wreckage of a house off the coast of Japan. It took place at an animal shelter in the Miyagi Prefecture. END_OF_DOCUMENT_TOKEN_TO_BE_REPLACED

In the state of Washington, a police dog was fatally stabbed after catching up to a suspected car thief who had allegedly tried to ram a police car a few minutes earlier. Kane, a Dutch shepherd dog, was rushed to a local animal hospital but was pronounced dead there, having received multiple stab wounds.

As reported in The Columbian, the dog had worked on the police force for over six years, and was one year away from retirement. He and his handler, Deputy Rick Osborne, had received an award in 2008 from the President’s Executive Office of National Drug Control Policy. END_OF_DOCUMENT_TOKEN_TO_BE_REPLACED

From Japan, the story of the dog found occupying the wreckage of a house, washed out to sea three weeks ago, and floating off the coast. The BBC has video. The Daily Mail has text and pictures.

From the look of this dog, I think it’s fair to speculate that before the disaster END_OF_DOCUMENT_TOKEN_TO_BE_REPLACED

On a pier near West 14th Street, a Manhattan woman named Molly was walking with her Wheaten Terrier, named Boogie, yesterday afternoon. The dog was not on a leash (although New York City ordinances require dogs to be leashed just about everywhere, except designated fenced-in dog-runs). She reports that Boogie suddenly ran towards a seagull and plopped off the pier into the cold and mighty Hudson river. She jumped in after her dog, fearing it would be swept out by the strong current. She managed to get the pooch and hunker against one of the supporting legs of the pier. A passerby dialed 911 and New York’s Finest harbor police were soon there to pull her and the soaking wet dog END_OF_DOCUMENT_TOKEN_TO_BE_REPLACED

Only in New York, kids: State Senator Ruben Diaz has introduced a bill that would require dog owners to take a basic instructional course, with their dogs, either before the dog’s first birthday or within 180 days of getting their dog. (Via NY Post.)

Senator Diaz himself owns a Pekinese named Chewie, and is quoted as saying:

When my dog barks a certain way, I understand what he wants. If he doesn’t get what he wants, sometimes he creates another behavior.

Well, how ’bout this, Senator Diaz? When a politician gets up in the morning, I understand what he wants (hint: to control people). If he doesn’t get what he wants, he creates another law. END_OF_DOCUMENT_TOKEN_TO_BE_REPLACED

In Etna, Pennsylvania, reports say a 61 year-old man named Ralph Shields went for a walk last Wednesday evening, as was his wont, with his dog, Primo. He didn’t come home. His brother, who lived with him, woke up the next morning and realized that that Mr. Shields had not returned — and neither had his dog. END_OF_DOCUMENT_TOKEN_TO_BE_REPLACED

No disrespect to the good people of Japan — who are generally giving a remarkable example of how to bear up in cataclysmic circumstances — but here, we talk about dogs.

On YouTube is video of a faithful dog standing by its friend — another dog who quite clearly is ill or injured. It’s tear jerking stuff, and good evidence of why when we look into the eyes of these animals, we see our own better qualities (or the ones we’d like to have). END_OF_DOCUMENT_TOKEN_TO_BE_REPLACED