Yours truly has been blessed to get to know a little bit the inestimable Bob Cohen over the last several years through shared interests in music and related shenanigans. In his current life, he is Cantor Bob Cohen of Temple Emanuel in Kingston, New York, and yesterday held a shindig there in celebration of his 75th birthday; essentially it was a chance to play music with and and for his friends, and intersperse it with stories of how he became the Bob Cohen he is today. 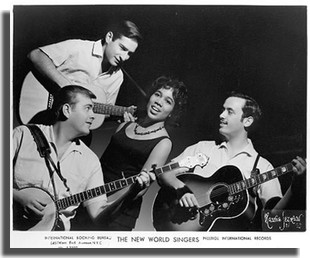 One musical friend in particular who attended and performed was Delores Dixon. Bob, Delores, the late Gil Turner and Happy Traum made up the New World Singers, a group who were based in Greenwich Village in the early ’60s and active in the folk revival and the civil rights movement and all that jazz. They can boast of being the first to record the young Bob Dylan’s song “Blowin’ in the Wind.” Delores Dixon and Dylan were particularly chummy—as Dylan mentions in his Chronicles—and the story is that it was hearing Delores sing the old slavery-inspired spiritual “No More Auction Block” that inspired him to adapt that melody for “Blowin’ in the Wind.” Delores sang “No More Auction Block” again yesterday, still in strong voice, and joined with Bob Cohen for “Blowin’ in the Wind” and other faves and anecdotes. As Delores remarked, though it’s been so many years since they sang in the same group, they fell right back into perfect musical symbiosis, and it was surely a treat to hear them.

Later in life, Bob Cohen taught music to kids at various private schools. Later still, he found employment working with a doctor, and then made some significant missteps, resulting in his being sent to prison for the crime of Medicaid fraud. He never shies away from talking about this, and with good reason, because it was a most remarkable turn in his life. While in prison he encountered rabbis who helped him towards rediscovering his Jewish identity and belief in God. And the music he loved to play made it natural for him to also sing for Protestants and Catholics in the prison system, exploring the shared threads that run through songs of faith. And he’s made interfaith doings a major part of his personal mission to this day. So he’s now been at Temple Emanuel for twenty years, and sharing his life with his wife Pat for eighteen of those, and using his special mix of talents and enthusiasms to inspire, amuse and bring people together, just as he was doing yesterday with the fine excuse of his 75th birthday. 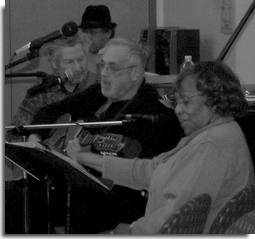 While enjoying the show, this listener couldn’t help but reflect that Bob Cohen’s story is one of those precious and moving reminders that when simple logic seems to recommend that one give in to despair—as many of us would if caught in a crime and imprisoned—there is always that still, small voice which, if listened to, can lift us even from a rock bottom of our own digging to an entirely new plateau, one with an endless vista. It’s always a good thing to be reminded of.