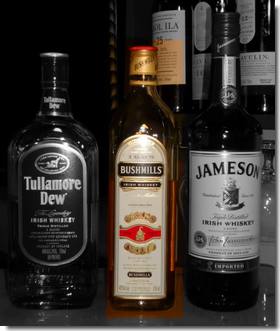 Speaking of Bushmills cannot but be a little personal for me. I was relatively young when I decided (or realized) that I was not cut out for drinking beer. One is always fine, but any more than that is just too much liquid. I find it wearying to consume. So, I looked to the spirit world for guidance. To order a mixed drink all the time seemed like it might be a bit fey, not to mention the link to monster hangovers. Being of Irish stock, I made a try of drinking Jameson, but as my review would’ve hinted, it did not ultimately please. I think I went straight from there to Scotches. I tried single-malts occasionally, but my standard go-to in a bar became the blended J & B. It was unostentatious, and quite sturdy enough for my youthful palate, although a little problematic to order in a loud bar since it was sometimes misheard as “Jim Beam,” which I found wasn’t my cup of tea at all.

To cut a long story short, there really is no story: I don’t remember what prompted me to try Bushmills Irish Whiskey. But from the very first time I had a Bushmills on the rocks, I knew I had found something special, like a pair of boots that always feel comfortable and make walking easy. I was amazed that no one had introduced it to me before. I didn’t know that an Irish whiskey could taste like this. (Actually, I think most of the proliferating Irish whiskies these days resemble Bushmills much more than Jameson, which is to their credit.)

It became my drink, the first thing I would seek in an unfamiliar bar, and the bottle I would bring with me when visiting friends or relatives with meager liquor cabinets: “Here’s a little something I brought for you. By the way, do you happen to have a glass and some ice?”

I could put this all down to a very personal taste, but for the fact that over the years I’ve seen so many people who have taken up Bushmills as their own drink after being exposed to it through my drinking of it, and I truly don’t think it is because of any general desire to emulate me. My wife is one (which is very convenient), and a significant number of friends and extended family-members. Too many, in the end, for it to be coincidental. Bushmills really has something which many people tend to like once they try it. What does it have?

Well, in my view, Bushmills offers a well-nigh perfect combination of qualities for an everyday whiskey. It possesses a sterling smoothness, and a caramel sweetness, but both the smoothness and the sweetness are contained within a robust wrapper of taste that prevents either from becoming cloying or dull. It is this unique bite, just short of a tingle, that makes it interesting. While the sweetness dissipates, the more sophisticated bite lingers and matures on the palate and assures you that you’ve just drunk something solid and wholesome.

Wholesome? It’s an odd word to apply to a whiskey. But consider this: Bushmills was my everyday drink for many, many years, and it’s fair to say that on one, or two, or maybe even as many as three occasions over all those years I was guilty of drinking too much, and suffering for it during the night and morning that followed. Yet, although I blamed myself freely, the Bushmills never became vile to me, as often do those things which make us sick. I realized that I had abused something that was in itself fundamentally good.

Now, in very much more recent times I have become more of a gin drinker; one only has so many days on this planet, and it was just time to expand my horizons. However, Bushmills has not fallen in my regard in any respect and makes a nice break from the gin, especially during the winter. And what brings me back to Bushmills is that one can always go back to it and find it as interesting and satisfying as ever. Its impact can be altered by varying how you drink it: on the rocks, with a splash of water, or straight—and different elements of its character come to the fore in each context. But for me, it has always been at its best with a little ice, and before that ice has melted too very much.

Bushmills Irish Whiskey is quite finer, in my view, than many considerably more expensive Scotches, and more suitable as an everyday kind of drink. To be sure, I’ve tasted single-malts that are more complex, with more lovely nuances, but they are obviously in a much higher price bracket, especially these days. I know of nothing currently on the whiskey shelves that better blends quality and affordability than Bushmills, at least in my locale. But beware: the affordability issue may change, as Irish whiskies generally are coming more into vogue.

My rating, then, is in the context of what Bushmills is; i.e. relative to other everyday drinks of the common man.

Writing so much about booze lately leads me to think I should offer the following for any impressionable types who might be reading:

Alcohol is poisonous. If you drink enough in one sitting you will die from it, and plenty of people do, especially the young. Downing shots with a bunch of yahoos is both moronic and dangerous. Learn to drink properly and by all means enjoy it, if you’re going to do it at all, but do not allow drinking to impede any other aspect of your life.