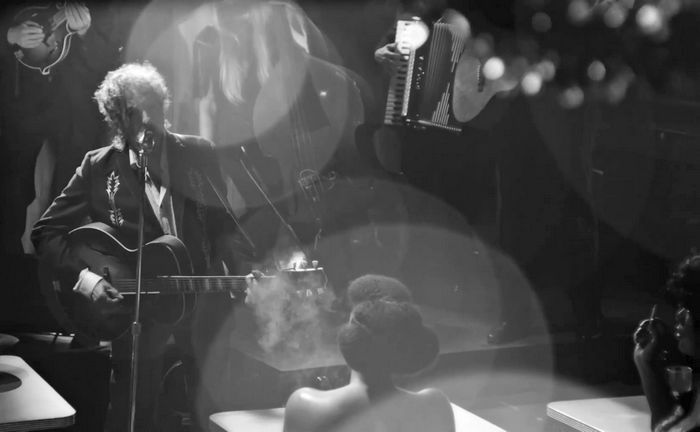 For about a month now fans have been awaiting this somewhat mysterious “exclusive broadcast event,” a pay-per-view-type online streaming performance by Bob Dylan, and now it has aired, and will continue to be available to watch for 48 hours. Access in the United States costs $25.

It features Dylan performing in a stylized small club setting, alternating between at least three different stagings. The arrangements and performances are sharp and quite beautiful. The instrumentation includes accordion, mandolin, Spanish guitar, and acoustic bass, and sometimes electric guitar and bass. No drums at all. Dylan’s singing is superb (assuming you’re someone who can take his singing at all).

He has an audience of heavily smoking actors and actresses. (It appears that they inhale very little smoke, the better to blow it out for effect. Still, this viewer appreciates Bob’s support for the struggling tobacco farmers.) The band wear black masks while everyone else breathes and smokes freely.

The whole thing is directed by one Alma Har’el, an Israeli-American who has a prize-winning feature film and documentary in her belt, as well as various music videos.

While initially the show was billed as featuring songs from throughout Dylan’s body of work, this broadcast is actually subtitled “The Early Songs of Bob Dylan.” And indeed it does focus on the 1960s, although there are a couple of exceptions in “What Was It You Wanted?” from 1989 and “Forever Young” from 1974. The show is about 50 minutes in duration. That surprised me: I thought it would probably be around 90 minutes.

Taken together, the subtitle “Early Songs” and the relatively short duration leads this viewer to conclude that this is going to be a series, and that there are likely at least two more “episodes” in the can.

It’s a brilliant business idea, to be sure: I bet Dylan could easily fetch a million views, globally, for something like this, and at $25 a pop, well … I’m not great at math, but it’s a fair bit of revenue for all concerned. And after the last year and a half of worldwide Wuhan weirdness, people are certainly well accustomed to substituting online experiences for the real thing.

In the end, for a fan, it’s one of life’s miracles, and something for which to be grateful. Bob Dylan is 80 years old, and here we get to see and hear him — in exceptional form — reworking his songs yet again in a scintillating and eye-opening manner. The version of “Forever Young” he performs is jaw-dropping: I’ve never heard him sing it so movingly (and I’ve heard him sing it quite a few times). “To Be Alone with You” is an almost entirely rewritten lyric, incorporating something of a religious passion. “Queen Jane,” “I’ll Be Your Baby Tonight,” “Tombstone Blues” — all standouts. Every song reveals something new of itself. It seems to this listener that the enormous work that Dylan did in recording five LPs worth of songs from the Great American/Sinatra songbook has enhanced his ability to reinterpret his own songs in especially gorgeous and sensitive ways.

The songs often sound like a commentary on our strange times, but that’s how Dylan’s songs always sound, grounded as they are in an awareness of death, eternity, human nature, and the things that remain.

And it’s all going to stand up to quite a bit of re-watching.