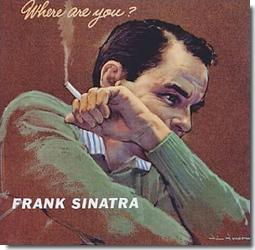 , which will indeed as speculated consist entirely of songs that would be best known as sung by Frank Sinatra.

It was a real privilege to make this album. I’ve wanted to do something like this for a long time but was never brave enough to approach 30-piece complicated arrangements and refine them down for a 5-piece band. That’s the key to all these performances. We knew these songs extremely well. It was all done live. Maybe one or two takes. No overdubbing. No vocal booths. No headphones. No separate tracking, and, for the most part, mixed as it was recorded. I don’t see myself as covering these songs in any way. They’ve been covered enough. Buried, as a matter a fact. What me and my band are basically doing is uncovering them. Lifting them out of the grave and bringing them into the light of day.

Since Bob Dylan and Frank Sinatra are effectively the sun and moon in my own list of favorite musical artists, the track list alone is enough to make this the best Christmas ever (though the album won’t be released until February 3rd, 2015):

Those are all songs recorded by Frank Sinatra, with a substantial number being songs introduced by him.

And the song that kicks off the album, “I’m A Fool To Want You,” is one of the rare ones where Sinatra himself has a writing credit (together with Jack Wolf and Joel Herron) and has always been understood to be very personal for Frank (though Sinatra of-course could make a song about lifting bales of cotton sound personal to him). He first recorded it in 1951 on Columbia Records—which was the year his “turbulent” marriage to Ava Gardner took effect—and again in 1957 on one of his great Capitol mood albums (Where Are You?)—which was the year his divorce of Ava Gardner took effect.

I really enjoy something Dylan says in his statement—for both its cockiness and truthfulness—namely, that he is not covering the songs but “uncovering them. Lifting them out of the grave and bringing them into the light of day.” The two songs we’ve heard already, “Full Moon and Empty Arms” and his live version of “Stay with Me,” certainly qualify for that because neither could be said to be well known songs. Most of the others on the track list are much better known, among people who listen to that kind of music and certainly among Sinatra fans. But they would not be so well known or appreciated by many in Bob’s audience (which now crosses several generations). And performances like we can expect from Dylan, in the manner of “Full Moon and Empty Arms,” promise to be revelatory on many levels.

Of-course, as maybe you can tell, I’m a fan.

It’s just nice to have lived to see this. And naturally it’s also very nice that Bob has stuck around with us long enough to do it.