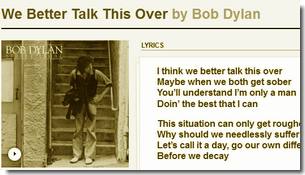 Many of the remarks Dylan made in his MusiCares speech a week ago are still echoing around the solar system, upsetting some as much as they’ve been entertaining and/or fascinating others. He covered a lot of ground and he named names, not always in a complimentary fashion. He said himself at the end of the speech: “I probably left out a lot of people and said too much about some.” That was a pretty good bet. So, obviously in the spirit of smoothing some, er, misimpressions, Dylan talked to writer Bill Flanagan, who has always been a worthy interviewer of Bob. Their conversation is posted at BobDylan.com and you can read it yourself. He also expands on some subjects he brought up, like the blues, rock & roll and all that jazz.

However, he doesn’t address the one thing that had disquieted yours truly in the last few days, which was his focusing on Tom T. Hall as a kind of Nashville musical villain. It’s not his opinion that troubled me—that’s just music criticism after all—but rather finding out afterwards that Hall’s wife of 46 years, Dixie Hall (a highly esteemed songwriter and beloved musician in her own right) died less than a month ago. That makes it bad timing to single out Tom T. Hall for some tough ribbing, and I would just have to assume Dylan didn’t know about this when he wrote and gave his speech. Otherwise it would seem to be plainly pretty callous to me. Softening his take on Tom T. Hall (versus so many lines about The Hag) would surely have been a good idea for this talk with Bill Flanagan.

One thing I would note about the Tom T. Hall stuff, however, is the fact that Dylan seems to bring him up and poke him a bit basically as a device for getting to the subject of Kris Kristofferson, who I think he really wanted to single out for some serious uplifting that night.

What a complicated world! It’s a wonder any of us can keep our award-acceptance-speeches straight.