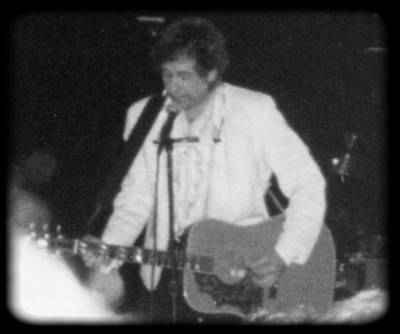 No doubt everyone’s heard it already by now, but for the record, here is an mp3 file of Bob Dylan’s remarks at his gig in Minnesota on election night 2008:

He spoke during his encore, in between playing “Like A Rolling Stone” and “Blowin’ in the Wind.” He introduced his band members and made his fateful comments after naming the bass player and mainstay of his band all these long years, the estimable Tony Garnier. Here is my own scrupulously accurate transcript:

I wanna introduce my band right now. On the guitar, there’s Denny Freeman. Stu Kimball is on the guitar too. Donnie Herron as well, on the violin right now, playin’ on the steel guitar earlier. George Recile’s playin’ on the drums.

Tony Garnier, wearin’ the Obama button — [applause] alright! — Tony likes to think it’s a brand new time right now. An age of light. Me, I was born in 1941 — that’s the year they bombed Pearl Harbor. Well I been livin’ in a world of darkness ever since. But it looks like things are gonna change now …

These remarks have been referred to and partially quoted in a variety of established news outlets since Bob Dylan made them. None of these reports, as far as I’ve seen, included Dylan’s reference to Tony’s Obama button, or his references to what he says is Tony’s belief that “it’s a brand new time now” and “an age of light.” Leaving out this context alters the tone of Dylan’s comments and renders them incomprehensible. As I said the other day, the remarks as reported seemed “completely cockamamie” and “not the Bob Dylan I know.” (Not that I’ve ever met the guy, you understand.)

As opposed to the professional journalists in attendance at the concert who got this thing so wrong, a kind reader of my website who wishes to be known only as John W., and who was also in attendance at that gig, had emailed me a much more accurate rendering of Bob’s remarks, in advance of us being able to hear the audio. His accuracy and fairness in remembering and reporting Bob’s actual words leads me to also give great credence to his overall description of the moment. You may or may not do the same. It is not crucial to understanding what Bob was really saying, but in the absence of a good quality video it helps paint the picture. This is how John characterized it:

What seemed to prompt him to talk to the crowd more than anything was Tony Garnier’s donning of an Obama button. It was Tony’s turn to be introduced and Bob started to chuckle a bit and said something like, “Tony Garnier over there wearing his Obama button (raises his eyebrows)…..Tony thinks it’s gonna be an Age of Light (chuckling)…..Well I was born in 1941, the year they bombed Pearl Harbor. Been living in darkness ever since……Looks like that’s all gonna change now (chuckling a bit).” Then he broke into “Blowin’ In The Wind.”

On the bootlegger’s audio, I don’t detect the sound of Dylan chuckling, but there’s such a thing as a quiet and more visual kind of chuckle and that may be what John was picking up on. It’s far from crucial in any case.

The news reports of Dylan’s remarks that I have seen all portrayed them as being a sincere endorsement by Bob Dylan of the notion that President Barack Obama is going to change everything for the better. I didn’t see any attempt to explain what he meant by saying that he’s been living in a world of darkness since he was born in 1941, the year of the attack on Pearl Harbor. It just makes sense to some people, I guess, to think that Bob Dylan has been miserable in this world since birth but that Barack Obama is going to change all of that. I couldn’t understand it myself. In my original post I put forth just one conceivable explanation (based on Bob’s deep links to the black American experience) but concluded that really only Dylan himself could explain the remarks as reported in the press.

Now, knowing the full context and tone of his words, I no longer think that Dylan needs to explain anything at all. I don’t believe that his actual remarks are even at all mysterious or cryptic. I think that they are crystal clear and they are consistent with how this man and this artist has tried to carry himself throughout the long and crazy years he’s been on this planet. He is being faithful, and we should also remember that it’s not easy to be faithful — it’s not easy for any of us. The dignity of this man is something that is not often pointed out. But he is a man of very great dignity, and this moment on the stage in Minnesota on election night of 2008 — offhand though it may or may not have been — was a moment where he exhibited great dignity as well as respect for his fans and for things more important than fame and wealth.

But lest I choke up too much here, let’s also lighten up, because his remarks were first and foremost jocular ones. When he says that Tony Garnier with his Obama button believes it’s going to be a “brand new time” and “an age of light,” he is clearly needling Tony, but doing it affectionately. I hate to descend to the level of saying “listen to how he says” something, but there are actually people out there who — after hearing the audio — are still taking Dylan’s remarks completely seriously; so for them, please: listen to how he says “an age of light.” Does it sound like something he believes in? Be honest for a moment and have an ear to hear. (But no one can be forced to do so.)

Once it is understood that Dylan is joking around and does not seriously believe that all things will be made new by the incoming U.S. president, then his words about living in a world of darkness for his entire life become comprehensible in the context of what his songs have told us again and again.

This litany will be of necessity very incomplete, but consider: Dylan sings of living in a world of mixed-up confusion, where everything is broken. He’s hung over, hung down, hung up and a million miles from the one he loves. He longs to disappear past the haunted, frightened trees. He looks out with his lady from Desolation Row, and sings a lullaby that goes, “When the cities are on fire with the burning flesh of men, just remember that death is not the end.” He sees the cat in the well, with the wolf looking down. He’s knocking and trying to get to heaven before that door shuts. He wanders around Boston town but his heart is in the Highlands — he can’t see any other way to go. The times are always changing and changing, and yet nothing ever really changes. Don’t conclude that he is without solace, however: he’s liable to stand on the table and propose a toast to the King. He’s using all eight carburetors. The hills and the one he loves have always given him a song.

The world of darkness, in other words, is not something foisted upon Bob by presidents of the United States or by political powers or anyone else in particular. For him (and maybe if we think about it for us too) it is just normality: it is the way things are. The world is a difficult place. Life is hard. People suffer and people die. The truth about anything that is of this world is ever-elusive and leaves one ultimately bereft of comfort.

Now, what I want to know is this: Is the new American president going to fix all that for Bob — all of the above? Is he going to take Bob out of this darkness he’s lived in since 1941? Does anyone think that Bob Dylan believes that, and that’s what he wanted to tell everybody on election night of 2008?

Bob Dylan is neither an idiot nor a crank, though he’s been called both on various occasions. He knew very well, singing to that University of Minnesota audience, how hyped up most of them were for Barack Obama’s election. His remarks were not a slam of Barack Obama, nor an endorsement of John McCain, or anything like that. In his own way, he was kindly alerting those with ears to hear that one should not have such high expectations of a politician or of any fellow human being. There will be no age of light; at least not until the real age of light, and that age will not be instituted by any president of the United States. All presidents, you see, sometimes have to stand naked.

Of-course, most at the gig heard what they were so desperate to hear: that change is a comin’ with Obama, and it’s all gonna be great.They heard “it looks like things are gonna change now” without the irony that the context provides. And Bob, dignified, gave them that respect. He didn’t mock them. Everyone has to come to their own understandings at their own pace. Some will think twice about what he said.

He then sang “Blowin’ in the Wind.” I love the current live arrangement of this song, which Bob and the band have been playing for quite a while. I wrote about it in a previous post here. It is indeed a buoyant and a joyous version. It is a version of the song which conveys — to this listener at any rate — how wonderful a thing it is that the answer is right there blowing in the wind in front of our faces. Thanks, Bob.

…
It is better to put trust in the LORD than to put confidence in princes. Psalm 118:9
…

Addendum: And one more thing. We all no doubt remember Bob’s quoted remarks in that interview with the U.K. Times last June. As they stood up to end the interview, the interviewer asked him “in a last aside” something about the coming U.S. election.

We don’t know exactly what the question was or what Dylan’s full response was. There is no pretence that we are being provided a complete transcript — it’s not that kind of an article. Dylan is quoted as crediting Barack Obama with “redefining the nature of politics from the ground up” and “redefining what a politician is.” He is quoted as saying that he’s “hopeful that things might change” and that “some things are going to have to.” Our fresh experience of seeing how journalists and newspapers missed the humor and irony of Bob Dylan on stage in Minnesota on election night — and gave us a completely different story — cannot but make me entirely reevaluate whatever I thought I knew about Dylan’s remarks in that interview. They may have been entirely ironic. Or maybe not. He also is quoted as saying, “You can’t expect people to have the virtue of purity when they are poor.” The remarks as quoted are, in the final analysis, incomplete and not fully comprehensible on their own — just like what was quoted in the Minnesota newspapers after the election night gig. So make of those quotes what you will, or, perhaps more wisely, make nothing of them at all.