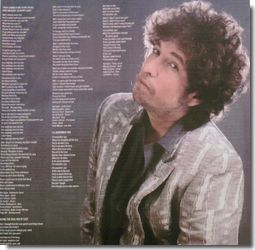 Although it was during the mid-1980s that yours truly happened to become a Bob Dylan fan, listening to his albums from that period has sometimes seemed like a guilty pleasure. While I’d stick up unreservedly for a certain number of those songs, there are those others that just seem silly. Yet, sometimes I kind of like them anyway. One that I probably wouldn’t have thought to defend in solemn company—but really have always liked—is “Never Gonna Be The Same Again” from his 1985 album Empire Burlesque. Well, now I’m correcting myself, and it’s thanks to hearing a solo acoustic version by Ron Sexsmith (on YouTube at this link).

Happening somehow upon Sexsmith’s YouTube channel (discreetly titled “Rawnboy”) made me feel like I’d found something secret and private (hope I’m not blowing the cover). Although he’s a genuine star and one of the finest pop songwriters of the last couple of decades, here he is just sitting in his kitchen and living room and playing things casually into the webcam, like a million YouTube amateurs do. So he’s uploaded a wealth of acoustic versions of his own songs, and a plethora of affectionate cover versions. (You’ve gotta wish everyone you were a fan of would do something like this. Bob, Van, you listening?) And of all the Bob Dylan songs he chooses to sing, it’s “Never Gonna Be the Same Again.”

Now, Bob Dylan’s original—like the rest of the album it comes from—is afflicted by cheesy-mid-80s production values (although, as I admit, I’ve always secretly enjoyed it anyway). Hearing it in this basic, simple form made it much clearer that it’s really a beautifully written pop song and nothing to be ashamed of at all—quite the contrary, in fact. And of-course Ron Sexsmith, who has written so many gorgeous pop songs himself, would recognize this about it.

I now think that “Never Gonna Be the Same Again” falls into the relatively small sub-category of fine Bob Dylan songs that anyone can really sing; i.e. those that are not too particular or too idiosyncratic to be accepted in somebody else’s voice.

It has a sweet pop melody filled with a soulful yearning which gets released in that refrain, “I ain’t never gonna be the same again.”

The opening lines have always made me smile:

Now you’re here beside me, baby
You’re a living dream
And every time you get this close
It makes me want to scream

That word scream is a little funny; it’s not customarily the reaction one is supposed to have to being in the presence of the object of one’s affection—more commonly denoting horror. But by being funny it makes you pay attention, announcing that something’s going on here.

And then there’s also the bridge:

You give me something to think about, baby
Every time I see ya
Dont worry, baby, I don’t mind leaving
I’d just like it to be my idea

The rhyme of see ya with idea is worthy of remark, but I also love the joke here: The singer tells his love not to worry, that he won’t be all clingy and hard-to-get rid of; no, he doesn’t mind leaving at all, just so long as it’s his idea to walk out the door.

And in the final verse:

You taught me how to love you, baby
You taught me, oh, so well
Now, I can’t go back to what was, baby
I can’t unring the bell

When I first heard this song I’d never heard the phrase “unring the bell” before. I wondered if this was an original thought by Dylan (but then, in the album right after this one, he sings, “if there’s an original thought out there, I could use it right now”). In actuality, it’s theorized that the term originated in the legal world, as a way of expressing how when information or evidence is presented in a trial, it can’t truly be forgotten even if it is belatedly ruled as being inadmissible.

As an analogy for the life-changing experience of falling in love with someone, however, it is terrific, and all the more so in a song, where music is the medium and the message.

The album from which this comes, Empire Burlesque, contains quite a few other distinctively pop-oriented tracks, and in particular two additional big and really quite fine ballads, in “I’ll Remember You” and “Emotionally Yours.” The latter song was covered by the O’Jays and was a pretty good hit for them.

It’s always seemed to me that with Empire Burlesque Bob Dylan in 1985 was making a conscious and at-the-same-time-somewhat-tongue-in-cheek stab at the pop charts and at remaking himself in a pop-star image. I think the title itself suggests the realization that once you get on stage or into the marketplace you are part of a burlesque show to one extent or another, whether you like it or not. And with the big pop love-ballads, I’ve long thought that Dylan was, if anything, trying to be like Lionel Ritchie, who was really making his name in that vein around the same time both with his band, The Commodores, and on his own.

Of-course, on that I could be completely off-base.

In any case, a big thank you is due to the great Ron Sexsmith for singing this song and in so doing highlighting something worthwhile and beautiful that might have been overlooked.